SIGNIFICANCE: Never has the unpredictability of juries been more idly demonstrated than in this case of such seeming straight forwardness.

Just minutes after delivering a speech at a New York City hotel in November 1990, Meir Kahane, militant conservative rabbi and former Jewish Defense League head, was shot down by a gunman. As the assassin fled, he wounded a Kahane supporter. Outside the building, El Sayyid Nosair, a 36-year-old Arab, was tackled by an armed U.S. Postal Service officer. Shots were exchanged, and both men were hit. Following treatment for his wound, Nosair was charged with murder.

Violent clashes between extremist Jews and Arabs on the steps of the courthouse marred the trial's opening day, November 4, 1991. Judge Alvin Schlesinger, plagued by death threats, commented sadly, "I have never seen so much hate. It's beyond reason, principle, and cause."

When lead prosecutor William Greenbaum led off for the state he contended that Nosair alone had fired the deadly bullets. Contrary to several pretrial statements in which he called Kahane's murder "a planned political assassination," Greenbaum neglected to attribute any motive to the accused, apparently feeling that the sheer weight of evidence obviated this customary bulwark of most prosecution cases.

Chief defense attorney William Kunstler argued that the reason for this omission was simple: his client was innocent, just someone who had fled the hotel fearing for his own life. According to Kunstler, Kahane had been murdered by a disgruntled supporter in a dispute over money. "You'll have to decide who shot Meir Kahane," he told the jury. "This case is not cut and dried." 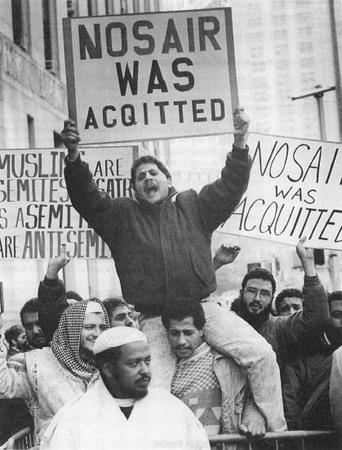 Supporters of El Sayyid Nosair after the jury's surprising verdict.

Michael Djunaedi, a student, placed Nosair with a gun in his hand just moments after the shooting. "I heard some guys yelling, 'He's got a gun!'" Seconds later, Djunaedi said, postal worker Carlos Acosta and Nosair began firing at each other.