SIGNIFICANCE: This First Amendment battle between long-time adversaries culminated in an unprecedented verdict.

For several years Larry Flynt's magazine Hustler had published a bizarre mix of sex, religion, humor and political comment. In the November 1983 issue it spoofed a Campari vermouth ad campaign in which various celebrities were asked to recall their "first time," that is, the first time they tried Campari. Hustler's version had nationally known pastor and political activist Reverend Jerry Falwell describing his "first time" as an incestuous encounter with his mother. The ad further stated that Falwell needed to be drunk to preach. At the foot of the page was a brief and barely noticeable disclaimer, "Ad parody—not to be taken seriously." Falwell, a perennial target of Flynt's irreverence, filed suit for libel, requesting $45 million in damages.

The jury was seated on December 3, 1984 and after opening statements, Falwell's attorney, Norman Roy Grutman, led off with his star witness. Falwell vehemently denied every allegation in the ad. "Have you ever taken alcoholic beverages before going into the pulpit to deliver your message?" asked Grutman.

"Never at any time," responded Falwell.

Over strident defense objections, Grutman inquired, "Mr. G. Falwell, specifically, did you and your mother ever commit incest?"

The reason for the defense objections was simple: it had been their contention all along that the idea of Jerry Falwell enjoying an incestuous relationship with his mother was so preposterous that no one could possibly believe it. Judge James Turk's decision to allow the question dealt a body blow to that argument, as did Falwell's heartfelt comment to the jury, "It is the most hurtful, damaging, despicable, low-type personal attack that I can imagine one human being can inflict upon another." 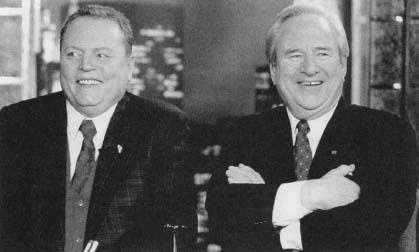