In February 1942, soon after the Japanese bombed Pearl Harbor in the surprise attack that committed the United States to World War II, President Franklin D. Roosevelt authorized the War Relocation Authority to detain persons of Japanese ancestry living on the West Coast, many of whom were not only American citizens but native-born.

Military commanders were authorized to designate areas from which such persons could be excluded; if they lived within those areas, the military could move them. Lt. General J. L. De Witt, of the Western Defense Command, proclaimed that the entire Pacific Coast of the United States:

[B]y its geographical location is particularly subject to attack, to attempted invasion by the armed forces of nations with which the United States is now at war, and, in connection therewith, is subject to espionage and acts of sabotage, thereby requiring the adoption of military measures necessary to establish safeguards against such enemy operations.

On those orders, 110,000 Japanese-Americans, 75,000 of whom were U.S.citizens, were removed from their homes. Meantime, Congress enacted legislation that ratified and confirmed the president's order.

Mitsuye Endo, a native-born American whose ancestors were Japanese, was taken from her home in Sacramento, California, to the Tule Lake War Relocation Center at Newell, California. Endo was 22. A Methodist who had never visited Japan and neither spoke nor read Japanese, she worked in the California Department of Motor Vehicles. At Tule, she and the others found they could not leave the center without written permission issued by the War Relocation Authority. 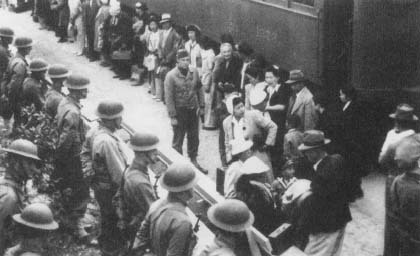