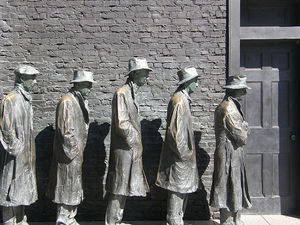 The National Industrial Recovery Act of 1933 (NIRA) was one of the most important and daring measures of President FRANKLIN D. ROOSEVELT's NEW DEAL. It was enacted during the famous First Hundred Days of Roosevelt's first term in office and was the centerpiece of his initial efforts to reverse the economic collapse of the Great Depression. NIRA was signed into law on June 16, 1933, and was to remain in effect for two years. It attempted to make structural changes in the industrial sector of the economy and to alleviate unemployment with a public works program. It succeeded only partially in accomplishing its goals, and on May 27, 1935, less than three weeks before the act would have expired, the U.S. Supreme Court ruled it unconstitutional.

Economists, scholars, politicians, and the public at large were deeply divided as to the underlying causes of the Great Depression and the best means to bring it to an end. In the months following Roosevelt's inauguration, his advisers, along with members of Congress and representatives from business and labor, drafted the legislation that was introduced in Congress on May 15, 1933, as the National Industrial Recovery Act. The division of opinions about the Depression was reflected in those who drafted NIRA, and the act drew both praise and criticism from across the political spectrum. Nevertheless, the urgency of the economic situation (with unemployment exceeding 30 percent in many parts of the country) pressured Congress to act.

The House of Representatives passed the NIRA by a vote of 325 to 76. When it reached the Senate, however, several powerful senators opposed the bill. Some progressives favored alternative legislation authored by Alabama Senator HUGO L. BLACK, which promoted a 30-hour workweek. Some senators were concerned that the act suspended the enforcement of ANTITRUST LAWS at the same time that it called on businesses to play a major role in drafting "codes of fair competition." The Senate eventually approved the bill by a margin of seven votes.

Title I of the act declared a "national emergency productive of widespread unemployment and disorganization of industry, which burdens interstate and foreign commerce, affects the public WELFARE, and undermines the standards of living of the American people." To correct this situation, NIRA proposed to "remove obstructions to the free flow of interstate and foreign commerce, … to eliminate unfair competitive practices, … to increase the consumption of industrial and agricultural products by increasing purchasing power, to reduce and relieve unemployment [and] to improve standards of labor." NIRA was designed to accomplish these goals through the codes of fair competition, which were essentially sets of rules created on an industry-by-industry basis governing wages, prices, and business practices. The codes were intended to arrest the downward spiral of the economy in which high unemployment depressed wages, which decreased public purchasing power, leading to lower prices and profits (as desperate businesses tried to undersell one another), putting further downward pressure on wages. It was hoped that organized cooperation between business and government would correct what was perceived by some to be waste and inefficiency in the free-market economy.

NIRA created the NATIONAL RECOVERY ADMINISTRATION (NRA) to oversee the drafting and implementation of the codes of fair competition. The agency was modeled, in part, after the War Industries Board, which had operated during WORLD WAR I. To lead NRA, Roosevelt chose former General Hugh S. Johnson, who had served as a liaison between the U.S. Army and the War Industries Board during World War I.

NRA began its work with great fanfare and initially received enthusiastic public support. A massive public relations campaign included the largest parade in the history of New York City. Businesses that adopted the codes were encouraged to advertise the fact by displaying the NRA blue eagle logo with its motto, "We do our part."

The NRA worked with businesses to establish the mandated codes for fair competition. Industrial groups then submitted proposed codes to the president for his approval. The president approved the codes only if the submitting organization did not restrict membership and was representative of the industry, and if the codes themselves promoted the policy of the act. Although the codes were exempt from antitrust laws, they were to neither foster monopolies nor discriminate against small businesses. Once approved, the codes became legally enforceable standards for that trade or industry.

Under Section 3 (c) of the act, federal district courts had jurisdiction over code violations, and U.S. district attorneys were given authority to seek court orders to compel violators to comply with the codes. Section 3 (f) provided that any violation affecting interstate or foreign commerce was to be treated as a misdemeanor for which an offender could be fined not more than $500 for each offense. Under Section 7 (a), industry codes were required to include provisions for the protection of labor. For example, provisions for minimum wages and the right to COLLECTIVE BARGAINING were to increase workers' deflated purchasing power, and limits on the number of work hours were to increase employment by spreading the available hours of work among more employees. Section 7 (a) also provided that an employee must not be required to join a company union or be prevented from joining a union as a condition of employment.

Section 7 (a) had such far-reaching consequences that some labor historians have called it the MAGNA CHARTA of the labor movement. Nationwide, union membership grew dramatically. The Amalgamated Clothing Workers, for example, doubled its membership from 60,000 to 120,000 between early 1933 and mid-1934. The United Mine Workers of America quadrupled its membership, from 100,000 to 400,000, less than a year after passage of NIRA.

Under the supervision of the NRA, several hundred industry codes were rapidly enacted, but public support soon diminished. The codes tended to increase efficiency and employment, improve wages and hours, prevent price cutting and UNFAIR COMPETITION, and encourage collective bargaining. However, they also tended to raise prices and limit production. Businesses found the codes burdensome. More than 540 codes were promulgated, and it was not unusual for one business to be governed by several, or even several dozen, codes. The codes sometimes conflicted with each other, and businesses occasionally had to pay their workers different rates of pay at different times of the day.

Laborers were also unhappy with NIRA. In spite of some NRA successes, such as the end of child labor in the textile industry, many in the labor community alleged that the NRA's interpretation of the labor provisions favored employers. In addition, labor was dissatisfied with the activities of the NRA regarding unions. It appeared that Congress had intended Section 7 (a) of NIRA to assist employees in self-organizing and to discourage company unions. However, the NRA did not actively seek to prohibit the creation of company unions, nor were NRA representatives available to protect individuals from being coerced into joining company unions.

The NIRA created the National Recovery Administration (NRA) to oversee the drafting and implementation of the codes of fair competition. Businesses adopting the codes were encouraged to advertise the fact by displaying the NRA blue eagle logo and motto, "We do our part."

contracts for the construction of public works. (The government did not directly employ workers on PWA projects, as it did in a later New Deal program with a similar name, the Works Progress Administration [WPA].) Secretary of the Interior Harold L. Ickes ran the PWA. Ickes was scrupulously honest in choosing projects and awarding contracts, and he insisted that funds not be wasted. He was successful in that respect. However, the result was that the benefits of the public works provisions of NIRA were realized too slowly to have much immediate effect on national recovery.

Nevertheless, the PWA did oversee an enormous number and variety of public works projects, including schools, hospitals, post offices, courthouses, roads, bridges, water systems, and waste treatment plants. Its two most prominent projects were the construction of the Triborough Bridge in New York City and the completion of the Boulder (now called the Hoover) Dam on the Colorado River in Arizona. Ultimately the PWA completed more than 34,000 projects around the country.

In spite of the gradual success of the Public Works Administration, the NRA continued to lose the support of the public and its government sponsors. Three weeks before NIRA's two-year expiration date, the Supreme Court unanimously declared it unconstitutional in Schechter Poultry Corp. v. United States, 295 U.S. 495, 55 S. Ct. 837, 79 L. Ed. 1570 (1935). The Court held that the act impermissibly delegated legislative power to the NRA and that the application of the act to commerce within the state of New York exceeded the powers granted to the federal government under the COMMERCE CLAUSE of the U.S. Constitution. The Commerce Clause gives Congress the power to regulate commerce between states, but not within an individual state.

In response to Schechter and to other decisions invalidating New Deal legislation, Roosevelt delivered a famous speech on May 31, 1935, in which he criticized the Supreme Court for employing "the horse and buggy definition of interstate commerce." Subsequent New Deal legislation incorporated some elements of NIRA, most notably the labor provisions of Section 7 (a), and ultimately survived the scrutiny of the Supreme Court.