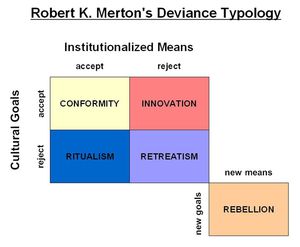 A recent version of strain theory is Robert Agnew's 1992 general strain theory. Agnew's theory draws heavily on previous versions of strain theory, particularly those of Robert Merton, Albert Cohen, Richard Cloward and Lloyd Ohlin, David Greenberg, and Delbert Elliott and associates. Agnew, however, points to certain types of strain not considered in these previous versions and provides a fuller discussion of the conditions under which strain is most likely to lead to crime.

The major types of strain. Agnew describes two general categories of strain that contribute to crime: (1) others prevent you from achieving your goals, and (2) others take things you value or present you with negative or noxious stimuli.

Money is perhaps the central goal in the United States. All people, poor as well as rich, are encouraged to work hard so that they might make a lot of money. Further, money is necessary to buy many of the things we want, including the necessities of life and luxury items. Many people, however, are prevented from getting the money they need through legal channels, such as work. This is especially true for poor people, but it is true for many middle-class people with lofty goals as well. As a consequence, such people experience strain and they may attempt to get money through illegal channels—such as theft, selling drugs, and prostitution. Studies provide some support for this argument. Criminals and delinquents often report that they engage in income-generating crime because they want money but cannot easily get it any other way. And some data suggest that crime is more common among people who are dissatisfied with their monetary situation—with such dissatisfaction being higher among lower-class people and people who state that they want "a lot of money."

Closely related to the desire for money is the desire for status and respect. People want to be positively regarded by others and they want to be treated respectfully by others, which at a minimum involves being treated in a just or fair manner. While people have a general desire for status and respect, theorists such as James Messerschmidt argue that the desire for "masculine status" is especially relevant to crime. There are class and race differences in views about what it means to be a "man," although most such views emphasize traits like independence, dominance, toughness, competitiveness, and heterosexuality. Many males, especially those who are young, lower-class, and members of minority groups, experience difficulties in satisfying their desire to be viewed and treated as men. These people may attempt to "accomplish masculinity" through crime. They may attempt to coerce others into giving them the respect they believe they deserve as "real men." In this connection, they may adopt a tough demeanor, respond to even minor shows of disrespect with violence, and occasionally assault and rob others in an effort to establish a tough reputation. There have been no large scale tests of this idea, although several studies such as that of Elijah Anderson provide support for it.

Finally, a major goal of most adolescents is autonomy from adults. Autonomy may be defined as power over oneself: the ability to resist the demands of others and engage in action without the permission of others. Adolescents are often encouraged to be autonomous, but they are frequently denied autonomy by adults. The denial of autonomy may lead to delinquency for several reasons: delinquency may be a means of asserting autonomy (e.g., sexual intercourse or disorderly behavior), achieving autonomy (e.g., stealing money to gain financial independence from parents), or venting frustration against those who deny autonomy.

Factors influencing the effect of strain on delinquency. Strainful events and conditions make people feel bad. These bad feelings, in turn, create pressure for corrective action. This is especially true of anger and frustration, which energize the individual for action, create a desire for revenge, and lower inhibitions. There are several possible ways to cope with strain and these negative emotions, only some of which involve delinquency. Strain theorists attempt to describe those factors that increase the likelihood of a criminal response.

Among other things, strain is more likely to lead to crime among individuals with poor coping skills and resources. Some individuals are better able to cope with strain legally than others. For example, they have the verbal skills to negotiate with others or the financial resources to hire a lawyer. Related to this, strain is more likely to lead to delinquency among individuals with few conventional social supports. Family, friends, and others often help individuals cope with their problems, providing advice, direct assistance, and emotional support. In doing so, they reduce the likelihood of a criminal response.

A variety of factors, then, influence whether individuals respond to strain with delinquency. Unfortunately, there has not been much research on the extent to which these factors condition the impact of strain—and the research that has been done has produced mixed results.