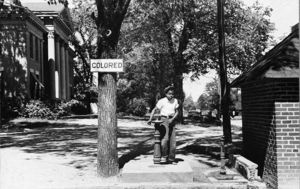 The Jim Crow Laws emerged in southern states after the U.S. CIVIL WAR. First enacted in the 1880s by lawmakers who were bitter about their loss to the North and the end of SLAVERY, the statutes separated the races in all walks of life. The resulting legislative barrier to equal rights created a system that favored whites and repressed blacks, an institutionalized form of inequality that grew in subsequent decades with help from the U.S. Supreme Court. Although the laws came under attack over the next half century, real progress against them did not begin until the Court began to dismantle SEGREGATION in the 1950s. The remnants of the Jim Crow system were finally abolished in the 1960s through the efforts of the CIVIL RIGHTS MOVEMENT.

The term "Jim Crow" laws evidently originated from a minstrel show character developed during the mid-nineteenth century. A number of groups of white entertainers applied black cork to their faces and imitated Negro dancing and singing routines. Such acts became popular in several northern cities. One of the performers reportedly sang a song with the lyrics, "Weel about and turn about and do jis so, Eb'ry time I weel about I jump Jim Crow." The moniker Jim Crow later became synonymous with the segregation laws.

The origins of Jim Crow lie in the battered South of the mid-nineteenth century. The Civil War had ended, but its antagonisms had not; the war of values and political identity continued. Many whites refused to welcome blacks into civic life, believing them to be inferior and resenting northern demands in the era of Reconstruction, especially the requirement that southern states ratify the THIRTEENTH AMENDMENT, which would abolish slavery. Southern states initially resisted by passing so-called BLACK CODES, which prohibited former slaves from carrying firearms or joining militias. More hostility followed when Congress enacted the CIVIL RIGHTS ACT of 1875 (18 Stat. 335), which guaranteed blacks access to public facilities. As the federal government pressed the South to enfranchise blacks, a backlash developed in the form of state regulations that separated whites from blacks in public facilities.

In the late nineteenth century, southern states took comfort from two U.S. Supreme Court decisions. First, in 1883, the Court struck down the Civil Rights Act of 1875 as unconstitutional, in the so-called CIVIL RIGHTS CASES, 109 U.S. 3, 3 S. Ct. 18, 27 L. Ed. 835. It ruled that Congress had exceeded its powers under the Reconstruction amendments. This decision

encouraged southern states to extend Jim Crow restrictions, as in an 1890 Louisiana statute that required white and "colored" persons to be furnished "separate but equal" accommodations on railway passenger cars. In fact, that law came under attack in the Court's next significant decision, the 1896 case of PLESSY V. FERGUSON, 163 U.S. 537, 16 S. Ct. 1138, 41 L. Ed. 256. In Plessy, the Court upheld the Louisiana law, ruling that establishing SEPARATE-BUT-EQUAL public accommodations and facilities was a reasonable exercise of the POLICE POWER of a state to promote the public good. Plessy kept the principle of separate but equal alive for the next 60 years.

By the start of WORLD WAR I, every southern state had passed Jim Crow laws. Becoming entrenched over the next few decades, the laws permeated nearly every part of public life, including railroads, hotels, hospitals, restaurants, neighborhoods, and even CEMETERIES. Whites had their facilities; blacks had theirs. The white facilities were better built and equipped. In particular, white schools were almost uniformly better in every respect, from buildings to educational materials. States saw to it that their black citizens were essentially powerless to overturn these laws, using POLL TAXES and literacy tests to deny them the right to vote. Jim Crow even extended to the federal government: Early in the twentieth century, discriminatory policies were rife throughout federal departments, and not until the KOREAN WAR (1950–53) did the armed forces stop segregating personnel into black and white units.

Opposition to the policy of Jim Crow came chiefly from African Americans. Early leadership was provided by the Afro-American National League in the 1890s and, after the turn of the century, the influential author and activist W. E. B. DU BOIS. The National Association for the Advancement of Colored People (NAACP), established in 1909, became the most powerful force for the repeal of Jim Crow laws during the next half century. The NAACP fought numerous battles in two important arenas: the court of public opinion and the courts of law.

By 1950, legal changes were coming in droves. The Court decided in favor of black student Herman Marion Sweatt concerning his appeal for entrance to the University of Texas Law School. In Sweatt v. Painter, 339 U.S. 629, 70 S. Ct. 848, 94 L. Ed. 1114 (1950), the Court ruled that the educational opportunities offered to white and black law students by the state of Texas were not substantially equal, and that the EQUAL PROTECTION CLAUSE of the FOURTEENTH AMENDMENT required that Sweatt be admitted to classes with white students at the University of Texas law school. Four years later came the Court's most significant decision affecting Jim Crow: BROWN V. BOARD OF EDUCATION, 347 U.S. 483, 74 S. Ct. 686, 98 L. Ed. 873 (1954). Overturning the precedent that had existed since Plessy in 1896, the Court in Brown decreed unconstitutional the policy of separate-but-equal educational facilities for blacks and whites.

Brown marked a turning point in the battle against the institution of segregation that Jim Crow laws had created. It was not the death knell, however. Much remained to be done, not only to topple legal restrictions but also to remove the barriers of prejudice and violence that stood in the way of full INTEGRATION. The final blows were administered by the civil rights movement, whose boycotts, sit-ins, and lawsuits continued over the next two decades. By the mid-1960s, the last vestiges of legal segregation were ended by a series of federal laws, including the Civil Rights Act of 1964 (42 U.S.C.A. § 2000a et seq.), the VOTING RIGHTS ACT OF 1965 (42 U.S.C.A. § 1971 et seq.), and the FAIR HOUSING ACT OF 1968 (42 U.S.C.A. § 3601 et seq.).