A City In Flames, Textbook Tactics

SIGNIFICANCE: What was already one of the highest profile cases in American legal history assumed landmark proportions when a second jury had to wrestle not only with questions of guilt or innocence, but how best to assuage outraged civic sensibilities.

In the early hours of March 3, 1991, motorist Rodney King was stopped by Los Angeles, California, police officers following a three mile high speed chase. According to arrest reports filed later, King refused orders to exit the car, then put up such a struggle that officers had to use batons and stun-guns to subdue him. However, unbeknownst to police, the entire incident had been captured on video by a nearby resident, and the resulting 81-second tape told a different story. In it King seemed to offer little resistance as several officers kicked and beat him to the ground while a dozen of their colleagues looked on. Public outrage led to a grand jury investigation and indictments against four officers for assault and use of excessive force.

Because of the extraordinary pretrial publicity, a defense motion to move the proceedings from Los Angeles succeeded, and on March 4, 1992, the trial began in suburban Simi Valley. In his opening speech, chief prosecutor Terry L. White referred to falsified reports submitted after the incident as evidence that the police had realized the illegality of their conduct and had tried to conceal it. But it was the evidence of another California Highway Patrol officer, Melanie Singer, which yielded the most prosecutorial advantage. She testified that defendant Laurence Powell had unnecessarily struck King six times with his metal baton. "He had it in a power swing and he struck the driver right across the top of the cheekbone, splitting his face from the top of his ear to his chin," she said. "Blood spurted out." Singer did say that defendants Koon and Briseno tried to restrain Powell from further beating King. 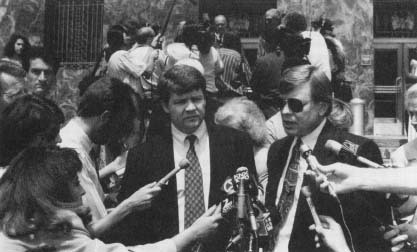 Laurence Powell with his attorney Michael Stone outside the courthouse, Stacey Koon in the background.

King, a tall, heavyset man and former convict, was never called to the stand by the prosecution, a decision reportedly based on prosecution fears that he would make a poor impression on jurors.

Under questioning, Briseno admitted that he did not consider King's actions to be threatening, and he repeatedly described codefendants Powell and Wind as "out of control." He further blamed Sergeant Stacey Koon, the highest ranking officer present, for not intervening.

It was the defense contention that the officers had believed King to be under the effects of PCP, a powerful hallucinogenic, and therefore extremely dangerous. (King had acknowledged that he had been drinking, but there was no evidence he had taken any drugs.) In his closing statement, defense attorney Michael P. Stone said of the tape, "We do not see an example of unprovoked police brutality. We see, rather, a controlled application of baton strikes, for the very obvious reason of getting this man into custody."

The jury clearly agreed. On April 29, 1992, they returned not-guilty verdicts for all defendants, deadlocking on only one charge against Powell.