SIGNIFICANCE: As with his colorful and controversial boxing career, Mike Tyson's trial-saturated with titillating accounts of sex and violent assault—was eagerly followed by fans and foes alike, although subsequent events would return him to the headlines.

At age 25, Mike Tyson had already won and lost the world heavyweight boxing championship. Seemingly on the verge of challenging to regain his crown, in July 1991 he attended the Black Expo in Indianapolis. One of the scheduled events was the Miss Black America pageant and one of the contestants was Desiree Washington, the 18-year-old Miss Rhode Island. Tyson, whose fondness for and occasional problems with attractive young women were well documented, invited Washington to his hotel room. Around 2:00 A.M. on July 19, she agreed. Three days later Washington went to the police. What she had to say resulted in Tyson facing charges of rape and related offenses.

Once the jury was impaneled on January 29, and after Judge Patricia J. Gifford had denied a request from Tyson's chief attorney, Vincent J. Fuller, that the accuser's sexual history be admitted into evidence, it was time for the opening statements.

Prosecutor J. Gregory Garrison delivered a ringing indictment of the defendant. "This man," he said, pointing at Tyson, "is guilty of pinning that 18-year-old girl to a bed and confining her… callously and maliciously raping her even though she cried out in pain."

Fuller, on the other hand, depicted a calculating vixen "mature beyond her 18 years," sophisticated and poised and out for money, an educated overachiever more than a match for a high-school dropout like Tyson. To be sure, Washington's level of sophistication had unnerved prosecutors before the trial, but when it came time for her testify she did so in a childlike voice, peppering her speech with expressions like "yukky."

She described receiving a phone call from Tyson at 1:36 A.M. Minutes later, believing herself to be en route to a party, she joined Tyson in his limousine. As soon as she entered the car Tyson grabbed her: "I kind of jumped back because I was surprised that, being who he is, he acted like that and, besides, his breath smelled kind of bad."

Instead of the expected party, they drove to Tyson's hotel. Once inside his room Tyson resumed his advances. At that point, Washington said, she told him that she was "not like the girls he must be used to hanging out with." Tyson, undeterred, pinned her down on the bed with one arm and used his free hand to undress her. All the while, she said, he mocked her efforts to resist, saying, "Don't fight me. Don't fight me." 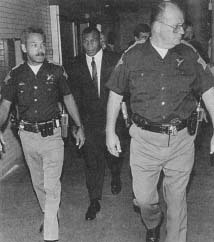 Boxer Mike Tyson pleaded not guilty to rape and was released on bond.