Quite naturally the defense, led by Barry Slotnick, saw things in an entirely different light. His opening statement left no doubts about their intention to turn this trial into an indictment of the "aggressors… this gang of four." Excoriating them as "savages and vultures … who got what the law allowed," Slotnick launched into a vitriolic assault on the character and credibility of James Ramseur, one of the alleged assailants. Five months after the Goetz incident, Ramseur had been arrested for participating in the savage gang-rape of a pregnant woman. "And to add insult to injury," thundered Slotnick, "Mr. Ramseur and his friends took her earrings and her ring, and left her bleeding on the rooftop landing." So heavy-handed and graphic did Slotnick's depiction of this rape become that it drew a sharp rebuke from Justice Stephen Crane: "Why don't you get off this, Mr. Slotnick."

But the damage had been done. The impression of the four black youths as rampaging sadists was firmly implanted in the jury's mind. This skillful defense manipulation of proceedings went a stage further when one of the state's witnesses, Detective Michael Clark, referred to "the four victims on the train." Slotnick was on his feet immediately. "Your Honor, I would object to the characterization of the "victim'. That's a decision the jury will have to make." Surprisingly Waples yielded the point, when there was no real need for him to do so, agreeing to the much meeker term "young men." It was another small but important victory for the defense. Slowly Bernhard Goetz was being turned into the victim in the case, not the perpetrator.

Central to the prosecution case was a taped confession that Goetz had made to police. Because Goetz would not take the stand, this was the jury's only opportunity to hear him speak. In a rambling two-hour account Goetz gave his version of the attack. It contained many damaging statements. Most incriminating of all was his clearly expressed intention "to murder them, to hurt them, to make them suffer as much as possible." Also revealed was his aversion to being "played with … as a cat plays with a mouse."

Several witnesses from the subway train testified. Through careful questioning Slotnick succeeded in drawing admissions that the action had happened so quickly as to impair their recollection of what actually occurred. In particular Slotnick created doubt about the actual number of shots fired. The intention here was to undermine the prosecution's claim that Goetz had cold-bloodedly stood over Cabey and fired the fifth and most damaging shot. Slotnick desperately needed to demonstrate that this injury had occurred just in random gunfire. By far the most resistant to this line of questioning was Christopher Boucher, a San Franciscan vacationing in New York at the time of the shooting. Boucher testified that he initially heard gunfire but that his view was blocked. However, he then saw Goetz "standing, looking down at the man in the seat." Waples asked, "How far was the defendant from him [Cabey]?"

Question: Did you see the gun at any point?

Question: And what did the person, who was sitting down, do at the moment the shot was fired?

Answer: Well, he was sitting, grasping the bench, and he just tightened.

Slotnick, aware that this was the most damaging eyewitness testimony yet, did everything in his power to discredit it. He began by implying that Boucher had been unduly influenced by media accounts of the shooting, an allegation that Boucher strenuously denied. Next, Slotnick asked Boucher, had he not been "shaken and traumatized" by the violence, perhaps enough to compromise his memory? 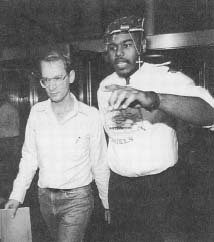 Bernhard Goetz leaving court escorted by Guardian Angel Keith Johnson. The Goetz trial addressed the question of a citizen's right to defend himself.