Freed on bail, Von Bülow engaged the services of noted Harvard law professor Alan M. Dershowitz to organize his appeal. Under Dershowitz's skilled probing, revelations came to light suggesting the strong likelihood that Sunny's coma was self-induced, as friends cataloged a lifetime of drug and alcohol abuse, interspersed with mammoth food binges, a potentially lethal combination for a known reactive hypoglycemic (someone who suffers from low blood sugar). Even more revealing, Maria Schrallhammer's memory was seriously flawed. Dershowitz found some notes made at the time by family attorney Richard Kuh, which unveiled grave inconsistencies in her various statements to police. These and other discrepancies convinced the Rhode Island Supreme Court, on April 27, 1984, to reverse the convictions and order a new trial.

Two days short of a year later it began. Apart from the counsel-—Marc DeSisto had taken over as chief prosecutor—the state's case was essentially unchanged. But this time the defense team mounted a far more vigorous campaign. They were led by Thomas Puccio, fresh from his success as a prosecutor in the ABSCAM trials (see separate entry), and now in private practice. He went after Schrallhammer on the vials. "The first time you spoke to Mr. Kuh you didn't tell him about the insulin. Is that correct?"

"That could be. That could very well be, since I was not concerned so much about the insulin."

In fact, Puccio established that Schrallhammer had not mentioned insulin to anyone, not until hearing that doctors had found insulin in Sunny's system. Turning to the vials found at Thanksgiving, Puccio extracted a grudging admission from the witness that she had no idea what they contained because, as she had told Kuh at the time, the labels had been scraped off. It was a telling blow.

Alexander von Auersperg, locator of the insulin-encrusted needle, also came under pressure. Puccio focused on a family meeting held shortly after that discovery. "One of the thing's you discussed at that meeting was a desire on the part of some of the people present to pay your stepfather some money to have him renounce any interest in your mother's estate. Isn't that right?"

Blood-sugar expert, Dr. George Cahill, also was forced to recant some of his former testimony. In a three-hour grilling Cahill now admitted that his previous assertion that only injected insulin could have produced Sunny's symptoms was false; certain prescription drugs might also produce a similar reaction.

The evidence of the encrusted needle was annihilated by Dr. Leo Dal Cortivo, a forensic toxicologist. He dismissed suggestions that it could have been used to inject Sunny, then gave the jury a practical demonstration why. The hypodermic was of the type which employed a separate vial, at no time would it come into contact with any insulin except through its hollow body and tiny aperture at the point. Once the insulin was injected, any residue on the needle would be wiped off by the skin as it was being withdrawn. Dal Cortivo's testimony obviously provoked speculation as to how the needle might have become encrusted. One possible solution was that it had been deliberately dipped into insulin. This theory, raising as it did the specter of Von Billow being framed, was not one which the defense actively pursued. 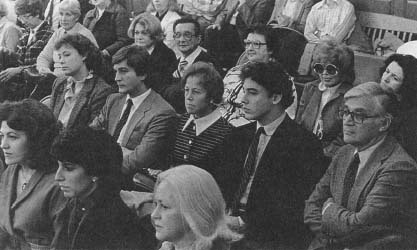 They didn't need to. Earlier, with the prosecution faltering, Judge Corrine Grands had almost granted the defense a mistrial, conceding that she was "holding this case together with baling wire."

As in the first trial Claus Von Billow maintained a lofty silence and did not take the witness stand. Furious family members angrily denounced this as an act of cowardice but other than a certain callous infidelity there was little that the defendant had to answer for. The jury members clearly thought so. On June 10, 1985, they acquitted Von Billow on all charges.

Considerable anger greeted this verdict, generating the belief that Claus Von B3ilow was a guilty man who had bought his freedom. Certainly his own wealth and that of affluent friends enabled him to employ the very best legal and forensic talent available, but it should be remembered that he was up against an equally well-endowed and very determined family, one prepared to spare no cost to see him convicted.