Prosecutor Thomas Norman sought to diffuse some of that volatility with a calm, orderly representation of the facts when the state opened its case against Dan White on May 1, 1979. He described in simple terms what amounted to a double execution, carried out deliberately and with malice aforethought. It was, he said, a crime deserving of death in the gas chamber. 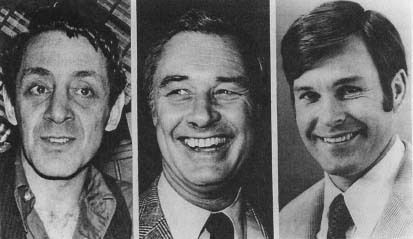 Few could have envied Douglas Schmidt's task when he rose to make the opening statement on White's behalf; after all, he was representing an admitted double assassin. However, he soon went on the offensive. In a fine speech he skillfully diverted the jury's attention away from the crime itself and onto the emotional traumas that White had undergone since relinquishing his position as city supervisor. "Good people, fine people, with fine backgrounds, simply don't kill people in cold blood," said Schmidt, "it just doesn't happen, and obviously some part of him has not been presented thus far." Schmidt claimed that White's crimes had been the product of manic depression, "a vile biochemical change" over which the defendant had no control. As added insurance, just in case this line of reasoning failed to sway the jury, Schmidt rounded out his opening with some very pointed comparisons between Milk's overtly homosexual lifestyle and White's all-American background.

The prosecution responded with a parade of witnesses, each of whom recounted events leading up to and on the fateful day at City Hall. Chief among them was recently elected San Francisco Mayor Dianne Feinstein. Mayor Feinstein detailed White's frustration with the political system, his inability to make a difference, as a major source of his discontent. Schmidt scored heavily on cross-examination when he asked, "Would it be your opinion that the man you knew [White] was the type of man who would have shot two people?" Over strenuous state objections, she was allowed to respond. "No," she said. "It would not."

At this point the prosecution began to unravel. What was supposed to be the high-water mark of their case—a taped confession made by White within hours of the shootings—turned into disaster. The tape should have sealed his fate. It did no such thing. Jurors heard him whine: "Well, it's just that I've been under an awful lot of pressure lately, financial pressure, because of my job situation, family pressure … because of not being able to have time with my family." The killings were hardly mentioned at all, and White's only display of remorse came when describing his own predicament. And yet, several jurors wept openly as they listened to the story of a man pushed beyond his endurance. Prosecutor Norman could not believe the evidence of his own eyes and ears—Dan White had been turned into a martyr, an object of sympathy.