SIGNIFICANCE: This was possibly the most divisive—certainly the most chaotic—political trial in American history.

The 1968 Democratic National Convention marked a watershed in American social unrest, as anti-Vietnam War protesters of every political hue descended on Chicago, Illinois, determined to undermine the convention and provoke a confrontation with authorities. They succeeded beyond their wildest expectations. Pitched battles in the streets led to grand jury indictments against eight conspicuously left-wing radicals: Rennie Davis, David Dellinger, John Froines, Tom Hayden, Abbie Hoffman, Jerry Rubin, Bobby Seale, and Lee Weiner. Each was charged with having crossed state lines to incite a riot, an offense that had been on the statute book less than nine months. Collusion between the accused was clearly not an issue—Seale did not even meet his co-defendants until the trial. More important was the government's resolve to quash antiwar protest with what amounted to an attack on the entire spectrum of political dissent.

Rarely does a member of the bench achieve or desire the celebrity that this trial afforded to Judge Julius Hoffman, who right from day one, September 24, 1969, displayed a pugnacious combativeness that was both ill-considered and wholly unjudicial. Seventy-three years old, humorless, and with a reputation for rulings sympathetic to the government, Hoffman's hostility toward the defendants was all too apparent.

On opening day, when U.S. Attorney Thomas Foran angrily objected because four lawyers listed for the defense were not present in court—all had withdrawn from the case by telegram—Hoffman immediately issued warrants for the arrest of the offending attorneys, then poured oil on troubled waters by temporarily jailing two of them for contempt of court. Such a firestorm of protest from the legal community greeted this action that Hoffman was obliged to rescind the order and allow the lawyers to withdraw. 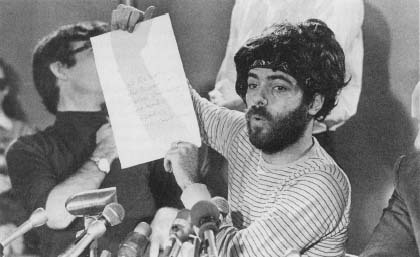 Jerry Rubin holds up a note from fellow defendant Bobby Seale who had been gagged during the previous day's trial session.

Defense attorney duties were shared by William Kunstler and Leonard Weinglass. Neither had an easy task. Besides battling the bench, they had Bobby Seale to contend with. Seale, a militant black activist, refused to accept either one as his attorney and on September 26 submitted a handwritten note to the court: "I submit to Judge Julius Hoffman that the trial be postponed until a later date when I, Bobby G. Seale, can have the "legal council [sic] of choice who is effective,' Attorney Charles R. Garry, and if my constitutional rights are not respected by this court then other lawyers on record here … do not speak for me … I fire them now." Judge Hoffman, taking exception to being characterized in the note as "a blatant racist," angrily denied the motion.