Gideon was outraged by the verdict, particularly the fact that he had been denied counsel. He applied to the Florida Supreme Court for a writ of habeas corpus, an order freeing him on the ground that he was illegally imprisoned. When this application was denied Gideon penciled a five-page document entitled "Petition for a Writ of Certiorari Directed to the Supreme Court." (A writ of certiorari is an order by an appellate court to hear a particular appeal.) In other words, Gideon was asking the U.S. Supreme Court to hear his case. The suit was placed on the docket under the title Gideon v. H.G. Cochran, Jr., who happened to be the director of Florida's Division of Corrections.

Each year the Supreme Court receives thousands of petitions. Most are meritless and don't get heard. Sheer weight of numbers militates against the deserving remainder, and yet, against all odds, the Supreme Court decided to hear Gideon's petition. Abe Fortas, who would himself later sit on the bench, was appointed to plead Gideon's case. Responding for Cochran were Bruce R. Jacob and George Mentz. The date for oral argument was set for January 14, 1963, but before that date Mr. Cochran resigned his position with the Florida Division of Corrections. He was replaced by Louie L. Wainwright—earning for that man an enduring and wholly unwanted place in judicial history—and the case was renamed Gideon v. Wainwright.

Fortas, arguing that the restrictive nature of Betts v. Brady had treated Gideon unfairly, drew a poignant analogy: "I was reminded the other night, as I was pondering this case, of Clarence Darrow when he was prosecuted for trying to fix a jury. The first thing he realized was that he needed a lawyer—he, one of the country's greatest criminal lawyers." It was time, said Fortas, for the law to change.

Needless to say, Jacob and Mentz stridently disagreed, but the mood of the times was against them, and, on March 18, 1963, the Supreme Court unanimously overruled Betts v. Brady, saying that all felony defendants were entitled to legal representation, irrespective of the crime charged. Justice Hugo L. Black wrote the opinion that set aside Gideon's conviction:

[R]eason and reflection requires us to recognize that in our adversary system of criminal justice, any person haled into court, who is too poor to hire a lawyer, cannot be assured a fair trial unless counsel is provided for him. This seems to us to be an obvious truth. 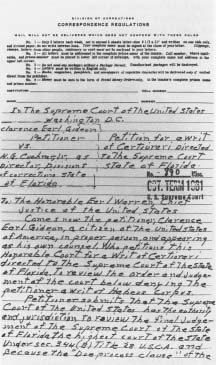 On August 5, 1963, Clarence Gideon again appeared before Judge Robert L. McCrary in the Panama City Courthouse, and this time he had an experienced trial lawyer, W. Fred Turner, to defend him. All of the publicity resulted in a heavily bolstered prosecution team. In addition to William Harris, State Attorney J. Frank Adams and J. Paul Griffith were on hand to uphold the validity of the first conviction. Henry Cook was again the main prosecution witness but fared badly under Turner's incisive questioning. Particularly damaging was his admission that he had withheld details of his criminal record at the previous trial. Due in large part to Cook's poor showing, the jury acquitted Gideon of all charges.

Because one man sat down and wrote a letter, no felony defendant need ever fear facing a court alone. Gideon v. Wainwright extended the law's protection to all. More than that, it gave justice a better name.