SIGNIFICANCE: The Billy Mitchell court-martial demonstrated not only that a prophet is without honor in his own country but that he is particularly unwelcome in the military. The longest and most controversial court martial in U.S. history, it came to epitomize the difficulty military strategists have in adapting to changing times and technologies. The cost of the country's resultant unpreparedness for World War II lies beyond reckoning.

Nineteen-year-old William Mitchell enlisted in the Army in 1898, at the outbreak of the Spanish-American War. By World War I, he had realized the significance of the airplane, put himself through flying school at his own expense, risen to the rank of colonel, and was chief of Air Service. Seeing the Army using the airplane at first only for observation and, later, to shoot at enemy planes, he was perplexed that strafing and bombing never occurred to the men who ran the war. He proposed to General John J. Pershing that troops be dropped behind German lines by plane and parachute "in order so to surprise the enemy by taking him from the rear that it would give our infantry an opening." Pershing found the idea impossible and absurd.

By the war's end, Mitchell was convinced that "Only an air force can fight an air force." Soon he had trained the first paratrooper, used the airplane for aerial mapping, developed the turbo booster and the variable-pitch propeller, predicted high-altitude flight where the thin atmosphere would permit speeds of 300 to 400 miles per hour, and mounted cannons on planes—ordnance not flown again until, ironically, it was mounted on the B-25 Mitchell bomber (named for Billy Mitchell) for Colonel Jimmy Doolittle's daring bombing of Tokyo early in World War II.

Declaring in 1921 that "the first battles of any future war will be air battles," Mitchell became an outspoken critic of the government's failure to develop the Air Service. When the House Naval Affairs Committee refused to let him demonstrate air power by bombing former German ships that had to be destroyed under the Armistice agreement, he went public, earning so many headlines nationwide with his descriptions of Navy vessels as "sitting ducks" that the House Appropriations Committee approved his plan.

The Joint Board of the Army and Navy promptly announced, "The battleship is still the backbone of the fleet." A colonel from the Engineer Corps was promoted to major general in command of the Air Service. Mitchell exhausted himself appearing before clubs and organizations, prophesying the air power of Germany, Russia, Italy, and Japan. Before a Congressional inquiry, he accused Army and Navy witnesses of "deliberate falsification of facts with intent to deceive the country and Congress."

To counter Mitchell's alarms, the Navy sent the aging dirigible Shenandoah on a tour. It crashed. Next a Naval "publicity flight" to Hawaii crashed. Mitchell told reporters:

My opinion is: Those accidents are the result of the incompetency, the criminal negligence, and the almost treasonable administration of our national defense by the Navy and War Departments.

Court-martial papers were served, charging the general with insubordination and conduct "to the prejudice of good order and military discipline."

For three weeks, defense counsel Frank G. Reid introduced witness after witness to prove that Mitchell, "after exhausting every usual means to safeguard the aerial defense of the United States without result, took the only way possible that would cause a study of the true conditions of the national defense to be made." Major (later General) Carl Spaatz testified on the country's numerical weakness in planes, Major (later General) "Hap" Arnold on the appalling number of deaths from worn-out equipment, former Captain Eddie Rickenbacker on the uselessness of anti-aircraft fire.

The people have placed their trust in the War and Navy Departments, to provide a proper defense for the safety of the nation. It has not been done. I consider this failure to be… the criminal offense of treason.

The judges, not one of whom had ever been up in an airplane, debated for three hours, found Billy Mitchell "Guilty on all counts," and sentenced him "to be suspended from rank, command, and duty with the forfeiture of all pay and allowances for five years." 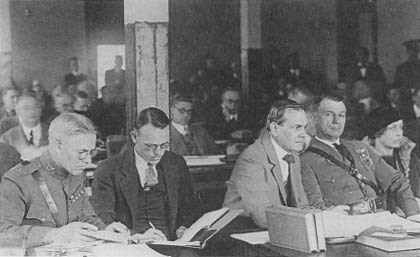 A joint resolution of Congress immediately proposed to restore Mitchell's rank and reimburse his expenses. President Calvin Coolidge, as commander-in-chief, upheld the suspension but restored the allowances and granted the general half pay. Mitchell resigned. Congress passed no resolution.

Mitchell settled on a farm in Virginia, raising livestock, writing, speaking, and trying without success to found a University of Aviation.

Billy Mitchell died of pneumonia in 1936. Precisely as he had predicted, on December 7, 1941, the Japanese, without formally declaring war, destroyed Clark Field in the Philippines and the "sitting duck" U.S. Navy fleet at Pearl Harbor by aerial bombardment.