One of the Triangle factories was located in the ninth story of a building overlooking New York City's Washington Place. A stairway led down to Washington Place. On another side of the ninth floor, the factory overlooked Greene Street. A stairway led down to the street, and also up to the roof. On March 25, 1911, a fire began on the eighth floor and came up through the Greene Street stairwell into Triangle's ninth floor, where the employees were busy at work. As smoke and fire filled the shop from the Greene Street side, the frightened women ran to the Washington Place exit, only to discover that the door was locked. They were trapped inside a burning building. 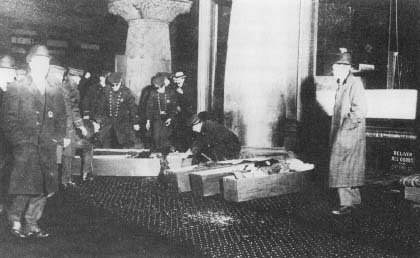 Although firemen rushed to the scene, they were too late to prevent scores of the women from being burnt alive. Driven by panic, many women jumped out the windows, only to fall to their death nine stories below. The impact of their bodies from such a height tore through the firemen's safety nets, and smashed holes in the pavement below. A total of 146 Triangle employees died.

The tragedy drew national attention, and the public demanded action against the parties responsible. On April 11 Max Blanck and Isaac Harris were charged with manslaughter. Blanck and Harris were represented by Max D. Steuer, one of the most celebrated and skillful lawyers of the period. The prosecutors were Assistant District Attorneys Charles S. Bostwick and J. Robert Rubin. The judge was Thomas C.T. Crain, and the trial began on December 4, 1911.

The trial took over three weeks, and 155 witnesses testified. one of the most gripping descriptions of what had happened came from Kate Alterman, a Triangle employee who survived the fire. First, she described how, amidst the chaos, she saw one Margaret Schwartz die in the flames because no one could open the Washington Place stairway door:

Horrified, Alterman watched the fire consume Schwartz. Alterman then described how she survived a mad dash through the fire raging through the Greene Street stairway:

And then I turned my coat on the wrong side and put it on my head with the fur to my face, the lining on the outside, and I got hold of a bunch of dresses and covered the top of my head. I just got ready to go and somebody came and began to chase me back, pulling my dress back, and I kicked her with my foot and she disappeared.

I tried to make my escape. I had a pocketbook with me, and that pocketbook began to burn. I pressed it to my heart to extinguish the fire, and I made my escape right through the flames: the whole door was a flame right to the roof.

Once she was on the roof, firemen eventually rescued Alterman. Despite Alterman's dramatic testimony and that of other witnesses, however, the trial turned upon the question of whether Blanck and Harris knew that the Washington Place door was locked. Judge Crain read his instructions to the jury on this point:

You must be satisfied from the evidence, among other things, before you can find these defendants guilty of the crime of manslaughter in its first degree not merely that the door was locked, if it was locked, but that it was locked during the period mentioned under circumstances bringing knowledge of that fact to these defendants.

But it is not sufficient that the evidence should establish that the door was locked, if it was locked, during such a period; nor yet that the defendants knew that it was locked during such a period, if it was locked … Was the door locked? If so, was it locked under circumstances importing knowledge on the part of these defendants that it was locked? If so, and Margaret Schwartz died because she was unable to pass through, would she have lived if the door had not been locked and she had obtained access to the Washington Place stairs and had either remained in the stairwell or gone down to the street or another floor?