SIGNIFICANCE: The alleged mutiny aboard Commander Alexander Slidell Mackenzie's ship, the U.S.S. Somers, was the first such incident in the history of the U.S. Navy. It was also the inspiration behind Herman Melville's novel Billy Budd.

On December 14, 1842, a warship of the U.S. Navy, the brig U.S.S. Somers, came into New York City harbor after a voyage to the African coast. The captain, Commander Alexander Slidell Mackenzie, reported to the astonished naval authorities that the vessel contained the bodies of three men hung for mutiny, the first such instance in American naval history.

The dead men were Samuel Cromwell, Elisha Small, and Philip Spencer. According to Mackenzie, they had been the ringleaders behind a plot to mutiny, murder Mackenzie and take the ship for themselves. Then, they would use the ship for piracy, preying on Atlantic shipping. Supposedly, two-thirds of the crew were prepared to join the mutiny, so Mackenzie was forced to act quickly by eliminating the leaders. Cromwell and Small were common sailors, but Spencer was the son of John C. Spencer, the powerful secretary of war for President John Tyler.

The trial began January 28, 1843. Under Norris' questioning, Mackenzie steadfastly maintained that imminent mutiny among the ship's crew made it imperative that he execute the three ringleaders. Apparently Mackenzie made this decision when quite a few disloyal sailors were discovered and a shipboard investigation was begun: 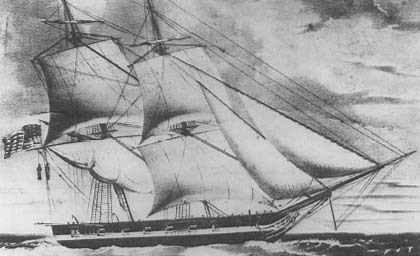 The USS Somers with the bodies of three alleged mutineers hanging from the yardarm.

Question: When did you first suppose it would be necessary to execute Mr. Spencer, Cromwell, and Small, for the safety of the vessel, officers, and crew?

Answer: When we made more prisoners [from the crew] than we had the force to take care of, and I was more fully convinced after the examination in the wardroom before the council of officers.

Norris introduced other personnel from the Somers as witnesses, but their testimony failed to contradict Mackenzie's tale. On March 31, the judges pronounced Mackenzie innocent:

The court …do acquit Commander Alexander Slidell Mackenzie of the charges and specifications preferred by the secretary of the navy against him.

There is no direct evidence that Secretary Spencer had attempted to influence the proceedings. Still, the judges must certainly have been aware of Spencer's reputation as a vindictive man, and of his unsuccessful effort to bring Mackenzie to trial in the civil courts as well. The court's verdict had been made without the customary statement of confidence in the accused's innocence, probably to placate Spencer:

As these charges involved the life of the accused, and as the finding is in his favor, he is entitled to the benefit of it, as in the analogous case of a verdict before a civil court; and there is no power which can constitutionally deprive him of that benefit. The finding, therefore, is simply confirmed and carried into effect, without any expression of approbation.

Mackenzie labored under the left-handed acquittal until he died in 1848. Meanwhile, the story of America's first naval mutiny had captured national attention in the press, and was the inspiration for Herman Melville's novel about struggle and life at sea, Billy Budd.

It also led to more concern within the U.S. Navy for the proper training and military discipline of American seamen, concerns vital to the emergence of the United States as a naval power in future years. For example, the Somers incident was the primary reason for the founding of the United States Naval Academy at Annapolis, Maryland in 1845.