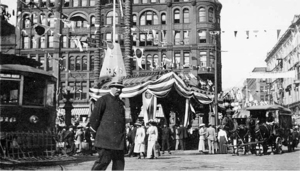 Police in America changed dramatically during the twentieth century. According to Walker (1999), three principle forces were underlying this change: the police professionalism movement, modern technologies, and the civil rights movement. Other scholars suggest that police reform was the result of investigative commissions, reform initiated by police administrators, and political reform in general (Gaines et al.).

In the early 1900s, a broad social and political movement in America, progressivism, was bringing attention to and demanding reform across a broad spectrum of social problems. Progressives believed it was the government's responsibility to improve the living conditions of citizens. They called for the regulation of big business and corrupt local politics, changes in labor laws, and improvements across all social welfare services. Included in this larger reform effort was the professionalization of police forces. The professionalization movement sought to reform the inefficient and corrupt police agencies that had developed during the nineteenth century. During this reform era, there was a total restructuring of police departments and a redefinition of the police role due to the perceived failure of police to enforce the law (Walker, 1977). Reformers sought to eliminate political influences, hire qualified leaders, and raise personnel standards. In addition, the reform agenda called for a mission of nonpartisan public service and restructuring of police organizations through the use of the principles of scientific management and the development of specialized units (Walker, 1999).

Several prominent police reforms had a significant influence on policing during this time period. Richard Sylvester, superintendent of the Washington, D.C., Police Department from 1898 to 1915, became the national voice for police reform. He served as president of the International Association of Chiefs of Police (IACP) and had a significant impact on acceptance of the reform agenda across numerous departments. Similarly, August Vollmer, police chief in Berkeley, California, from 1905 to 1932, advocated the hiring of college graduates and offered the first collegiate course in police science at the University of California. Vollmer is also famous for the development of the principles of modern police administration. Advocates of the concepts of administrative efficiency sought to "centralize the authority within police departments" and to "rationalize the procedures of command control" (Walker, 1977).

The reform of police agencies during the first part of the twentieth century was very slow to develop, and in some cities the impact of early reform efforts was nonexistent. Although considerable gains were made in agencies of cities such as Cincinnati and Berkeley, reform efforts were largely ineffective in other agencies, such as those of Los Angeles and Chicago (Walker, 1977). Efforts to professionalize the police increased after the 1931 reports by the Wickersham Commission, which contained vivid descriptions of police misconduct and use of force. The Wickersham Commission Report was the first national study of the criminal justice system in America and had a significant impact on the revitalization of the reform movement.

Professionalization continued under the direction of O. W. Wilson, one of Vollmer's protégés. Wilson was the chief of police in Wichita, Kansas, from 1928 to 1935, a professor of criminology at the University of California, and chief of the Chicago Police Department in the 1960s. Wilson had a significant impact on organizational changes within police departments during this time, largely through his textbook Police Administration (1950). Utilizing scientific principles of management, Wilson emphasized workload distributions based on calls for service and efficient management of personnel through bureaucratic design. Wilson also encouraged departments to gauge their success through measurable outcomes (numbers of arrests, citations, etc.) and rapid response to calls for service.

Also influential during this time period was J. Edgar Hoover, director of the Federal Bureau of Investigations (F.B.I.). Hoover's leadership of the F.B.I. had a direct influence on local police agencies because of his portrayal of agents under his command as highly trained and educated, professional, and honest. In addition, he instituted the F.B.I.'s Top Ten Most Wanted List, controlled the Uniform Crime Report (UCR) system, and effectively communicated to citizens that his organization was involved in a "war on crime." Most local departments wanted to emulate the professional F.B.I. agents and thus perpetuated the "crime fighter" image.

New technologies also had a significant influence on policing in the early to mid-twentieth century. Three technologies in particular have revolutionized policing: the two-way radio, the patrol car, and the telephone. As previously noted, policing in the nineteenth century was characterized as ineffective and inefficient, in part because officers could not be contacted on their beats. With the advent of the two-way radio, officers could be notified about calls for service and police supervisors could contact their officers directly. This change in technology had a significant impact on the provision of services to the public and the supervision of police personnel. Likewise, the use of patrol cars in the 1920s greatly enhanced the mobility of police officers and significantly reduced their response time to calls for service from citizens. Finally, the use of the telephone allowed citizens to have direct contact with the police department. Citizens were encouraged to call the police for any type of situation and the police promised a rapid response.

These new technologies also had unintended consequences on policing, the effect of which was not fully understood until much later. For example, the patrol car served to isolate patrol officers from the community. Previously, when officers patrolled on foot, they had an opportunity to engage citizens in conversations and had a familiarity with the neighborhood that was lost once officers patrolled in cars. When officers drove through neighborhoods with their windows rolled up, citizens perceived officers as outsiders in their communities. Encouraging citizens to call the police for service and promising a rapid response dramatically increased the workload of officers. Citizens began to call police for minor problems and the police continued to respond. In addition, police were called to handle private matters that they had not been responsible for in the past. The interactions between citizens and police took on a more personal nature as police responded to citizens' homes rather than simply patrolling and engaging citizens on the street. As described by Walker, the result of these new technologies "was a complex and contradictory change in police-citizen contacts. Whereas the patrol car isolated the police from the people on the streets, the telephone brought police officers into peoples' living rooms, kitchens, and bedrooms. There, officers became involved in the most intimate domestic problems" (1999, p. 32).

To summarize, policing during the reform era changed as organizations characterized by inefficiency, corruption, and low personnel standards were transformed into "professional" departments. The professionalization movement stressed changes in the levels of officer education and training, appointment of qualified reformminded administrators, and adherence to scientific principles of management. Police organizational structures during this time were centralized, specialized, and bureaucratic. Professional officers emphasized their functions of law enforcement and crime prevention through random motorized patrol and rapid response to calls for service.