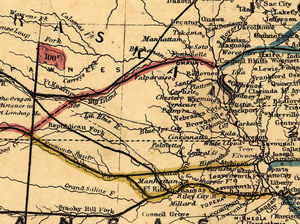 The Pacific Railroad Act, passed by Congress in 1862 (12 Stat. 489), authorized the construction of the first transcontinental railway line connecting the east and west coasts. The need for a transcontinental railway to facilitate transportation of persons and products across the United States became increasingly clear in the 1850s due to the acquisition of California and the resolution of the Oregon boundary dispute. In 1862, before the secession of the South from the Union, the REPUBLICAN PARTY in Congress was instrumental in enacting legislation that authorized the Union Pacific Railway and the Central Pacific Railroad to construct such a railway. The Union Pacific Railway was to begin construction at Omaha, Nebraska, with the objective of connecting with the Central Pacific Railroad, which was to begin construction at the same time at Sacramento, California. The law provided that after each railroad laid forty miles of track, it was to receive 6,400 acres of public lands and government loans ranging from $16,000 to $48,000 per mile of track completed.

Congress passed additional legislation in 1864 to provide more land and money to complete the project. The two lines finally met at Promontory Point, Utah, in 1869, thereby providing a fast means of access from the Missouri River and the Pacific Ocean by rail.