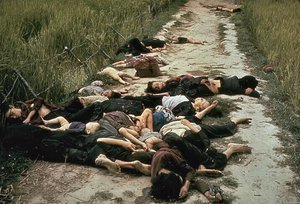 The event known as the "My Lai Massacre" was one of the darkest moments of the VIETNAM WAR, and further fueled the already growing anti-war movement in the United States. On March 16, 1968, U.S. Army troops murdered more than 300 unarmed Vietnamese women, children, and elderly persons. When the facts of the massacre became known, war crime charges were brought against 30 soldiers, and there was a marked increase in both domestic and foreign pressure to end the war.

The Vietnam War began in the 1940s as a war of liberation between Vietnamese nationalists called the Viet Minh and the French who controlled Vietnam. The Viet Minh sought help from Communist China in the mid-1950s, bringing the conflict to the attention of the United States. In 1954 the French were decisively defeated, and the country was temporarily divided into North Vietnam and South Vietnam. Most of the Viet Minh and their supporters relocated to North Vietnam. When the provisional head of South Vietnam refused to hold reunification elections, hostilities resumed.

Fearing a communist takeover if the North Vietnamese won, the United States provided economic and military aid, and by 1967 the United States had almost 400,000 troops in the country. Viet Cong, Vietnamese soldiers who had trained in the North and moved back to the South to conduct guerilla warfare, were especially feared. Dressed to blend in with the peasants who populated South Vietnamese villages, the Viet Cong carried on a stealthy campaign of sabotage and murder. American soldiers, who did not speak Vietnamese and were unable to distinguish between Viet Cong combatants and the general population, were anxious and wary whenever they traveled into the rural countryside. Knowing that many villagers were sympathetic to the Viet Cong added to their stress.

My Lai was part of the Song My village located in South Vietnam's Quang Ngai Province. The area had been heavily mined by the Viet Cong, and in the weeks preceding the massacre, numerous members of "Charlie Company," a unit of the U.S. Army's American Division, had been injured or killed by the mines. Under the direction of Captain Ernest Medina, a group of about 120 anxious and angry soldiers from Charlie Company entered My Lai on a mission to "search [out] and destroy" enemy soldiers.

According to later EYEWITNESS reports, the soldiers, under orders from their platoon leader Lieutenant William L. Calley, used rifles, machine guns, bayonets, and grenades to kill the villagers. Old men, women who begged and prayed for mercy, children, and babies were murdered by the soldiers. Several young girls were raped and killed. Estimates of the number of villagers massacred at My Lai ranged from 300 to 500; the final army estimate was 347. Of the 100 soldiers who entered My Lai about 30 participated in the killing. Most of the other soldiers did not participate, but they did not try to stop the killing. Some testified later that they thought their lives would be in danger if they tried to stop their fellow soldiers.

Informed of the incident by Captain Hugh C. Thompson, an army helicopter pilot who had managed to save a few of the villagers, the U.S. Army did nothing. Ron Ridenhour, an army helicopter gunner, was told about the massacre shortly after it took place. After leaving the service, Ridenhour wrote detailed letters to the Pentagon, Congress, and the White House asking for an investigation. In November 1969 the army appointed General William R. Peers to look into Ridenhour's charges.

After a four-month army investigation that included listening to 398 witnesses and collecting thousands of pages of testimony, charges were initially brought against 30 of the participants; that number was subsequently reduced to 13. Nine enlisted men and four officers faced charges ranging from murder to dereliction of duty for covering up the incident.

In November 1969 Seymour Hersh's newspaper story about the events of My Lai and subsequent follow-up reports shocked and horrified people around the world. The stories ignited waves of controversy over U.S. presence in Vietnam and increased pressure to bring an end to the war.

In 1971 five members of Charlie Company including Captain Medina and Lt. Calley were subjected to courts-martial. Captain Medina was represented by prominent defense attorney F. LEE BAILEY and was acquitted of all charges. Lt. Calley was the only soldier convicted. He was found guilty of the premeditated murder of more than 20 Vietnamese civilians and sentenced to life imprisonment. His sentence was later reduced to 10 years and he was paroled in September 1975.

In May 1998 three former U.S. soldiers who had placed themselves at risk to save some of the civilians at My Lai were awarded (one posthumously) the army's prestigious Soldier's Medal.