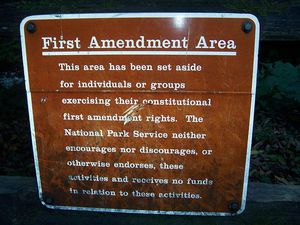 The First Amendment to the U.S. Constitution reads:

Congress shall make no law respecting an establishment of religion, or prohibiting the free exercise thereof; or abridging the freedom of speech, or of the press; or the right of the people peaceably to assemble, and to petition the Government for a redress of grievances.

At first glance, the First Amendment appears to be written in clear, unequivocal, and facile terms: "Congress shall make no law" (emphasis added) in contravention of certain religious and political principles. After a closer reading, and upon further reflection, the amendment's underlying complexities rise to the surface in the form of persistent questions that have nagged the legal system over the last two centuries.

What kind of law "respect[s] the establishment of religion"? Does the First Amendment include here only laws that would establish an official national religion, as the Anglican Church was established in England prior to the American Revolution? Or does it also include laws that recognize or endorse religious activities such as the celebration of Christmas? More importantly, can people agree on what is meant by the word religion so that judges may know when religion is being "established" or when the right to its "free exercise" has been infringed?

In the area of free speech, does the right to speak your mind include the right to use offensive language that could start a fight or incite a riot? Is FREEDOM OF SPEECH synonymous with freedom of expression, such that the right to condemn the U.S. government extends to offensive symbolic actions involving no written or spoken words, like burning the U.S. flag? Does FREEDOM OF THE PRESS protect the right to publish scurrilous, defamatory, and libelous material? If not, can the government prohibit the publication of such material before it goes to print?

The U.S. Supreme Court has confronted most of these questions. Its answers have not always produced unanimous, or even widespread, agreement around the United States. But the Court's decisions have provided a prism through which U.S. citizens have examined the appropriate limitations society may place on the freedoms protected by the First Amendment, and have sparked colorful and spirited discussions among friends and family members, as well as politicians and their constituents.