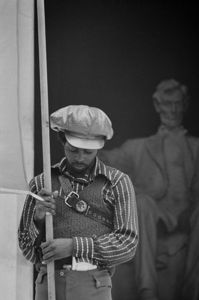 The Black Power movement grew out of the CIVIL RIGHTS MOVEMENT that had steadily gained momentum through the 1950s and 1960s. Although not a formal movement, the Black Power movement marked a turning point in black-white relations in the United States and also in how blacks saw themselves. The movement was hailed by some as a positive and proactive force aimed at helping blacks achieve full equality with whites, but it was reviled by others as a militant, sometimes violent faction whose primary goal was to drive a wedge between whites and blacks. In truth, the Black Power movement was a complex event that took place at a time when society and culture was being transformed throughout the United States, and its legacy reflects that complexity.

In the 1950s and early 1960s, groups such as the National Association for the Advancement of Colored People (NAACP) and the SOUTHERN CHRISTIAN LEADERSHIP CONFERENCE (SCLC) worked with blacks and whites to create a desegregated society and eliminate RACIAL DISCRIMINATION. Their efforts generated positive responses from a broad spectrum of people across the country. Rev. MARTIN LUTHER KING JR., who headed the SCLC, made significant headway with his adherence to nonviolent tactics. In 1964, President LYNDON B. JOHNSON signed the CIVIL RIGHTS ACT and a year later he signed the VOTING RIGHTS ACT.

CIVIL RIGHTS legislation was an earnest and effective step toward eliminating inequality between blacks and whites. Even with the obvious progress, however, the reality was that prejudice could not be legislated away. Blacks still faced lower wages than whites, higher crime rates in their neighborhoods, and unspoken but palpable racial discrimination. Young blacks in particular saw the civil rights movement as too mainstream to generate real social change. What they wanted was something that would accelerate the process and give blacks the same opportunities as whites, not just socially but also economically and politically. Perhaps more important, they felt that the civil rights movement was based more on white perceptions of civil rights than black perceptions.

Not all blacks had been equally impressed with the civil rights movement. MALCOLM X and the NATION OF ISLAM, for example, felt that racial self-determination was a critical and neglected element of true equality. By the mid-1960s, dissatisfaction with the pace of change was growing among blacks. The term "black power" had been around since the 1950s, but it was STOKELY CARMICHAEL, head of the STUDENT NONVIOLENT COORDINATING COMMITTEE (SNCC), who popularized the term in 1966.

Carmichael led a push to transform SNCC from a multiracial community activist organization into an all-black social change organization. Late in 1966, two young men, HUEY NEWTON and BOBBY SEALE, formed the BLACK PANTHER PARTY FOR SELF-DEFENSE (BPP), initially as a group to track incidents of police violence. Within a short time groups such as SNCC and BPP gained momentum, and by the late 1960s the Black Power movement had made a definite mark on American culture and society.

The Black Power movement instilled a sense of racial pride and self-esteem in blacks. Blacks were told that it was up to them to improve their lives. Black Power advocates encouraged blacks to form or join all-black political parties that could provide a formidable power base and offer a foundation for real socioeconomic progress. For years, the movement's leaders said, blacks had been trying to aspire to white ideals of what they should be. Now it was time for blacks to set their own agenda, putting their needs and aspirations first. An early step, in fact, was the replacement of the word "Negro" (a word associated with the years of SLAVERY) with "black."

The movement generated a number of positive developments. Probably the most noteworthy of these was its influence on black culture. For the first time, blacks in the United States were encouraged to acknowledge their African heritage. COLLEGES AND UNIVERSITIES established black studies programs and black studies departments. Blacks who had grown up believing that they were descended from a backwards people now found out that African culture was as rich and diverse as any other, and they were encouraged to take pride in that heritage. The Black Arts movement, seen by some as connected to the Black Power movement flourished in the 1960s and 1970s. Young black poets, authors, and visual artists found their voices and shared those voices with others. Unlike earlier black arts movements such as the Harlem Renaissance, the new movement primarily sought out a black audience.

The same spirit of racial unity and pride that made the Black Power movement so dynamic also made it problematic—and to some, dangerous. Many whites, and a number of blacks, saw the movement as a black separatist organization bent on segregating blacks and whites and undoing the important work of the civil rights movement. There is no question that Black Power advocates had valid and pressing concerns. Blacks were still victims of racism, whether they were being charged a higher rate for a mortgage, getting paid less than a white coworker doing the same work, or facing violence at the hands of white racists. But the solutions that some Black Power leaders advocated seemed only to create new problems. Some, for example, suggested that blacks receive paramilitary training and carry guns to protect themselves. Though these individuals insisted this device was solely a means of SELF-DEFENSE and not a call to violence, it was still unnerving to think of armed civilians walking the streets.

Also, because the Black Power movement was never a formally organized movement, it had no central leadership, which meant that different organizations with divergent agendas often could not agree on the best course of action. The more radical groups accused the more mainstream groups of capitulating to whites, and the more mainstream accused the more radical of becoming too ready to use violence. By the 1970s, most of the formal organizations that had come into prominence with the Black Power movement, such as the SNCC and the Black Panthers, had all but disappeared.

The Black Power movement did not succeed in getting blacks to break away from white society and create a separate society. Nor did it help end discrimination or racism. It did, however, help provide some of the elements that were ultimately necessary for blacks and whites to gain a fuller understanding of each other.