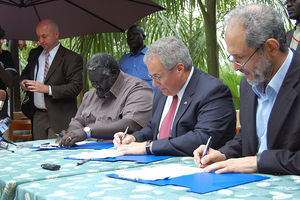 Both parties to a bilateral contract make promises. With respect to the promise in issue, the party making the promise is the promisor and the other party is the promisee. The legal detriment incurred by the promisee consists of a different promise by him or her to do something or refrain from doing something that he or she was not previously legally obligated to do or to refrain from doing. This legal detriment constitutes consideration, the cause, motive, or benefit that induces one to enter into a contract. Consideration is an essential component of a contract.

For example, if someone offered to drive you to work on Mondays and Tuesdays in exchange for your promise to return the favor on Wednesdays and Thursdays, a bilateral contract would be formed binding both of you once you provided consideration by accepting those terms. But if that same person offered to pay you $10 each day you drove him to work, a unilateral contract would be formed, binding only upon the promisor until you provided consideration by driving him to work on a particular day.

Modern courts have de-emphasized the distinction between unilateral and bilateral contracts. These courts have found that an offer may be accepted either by a promise to perform or by actual performance. An increasing number of courts have concluded that the traditional distinction between unilateral and bilateral contracts fails to significantly advance legal analysis in a growing number of cases where performance is provided over an extended period of time.

Suppose you promise to pay someone $500.00 to paint your house. The promise sounds like an offer to enter a unilateral contract that binds only you until the promisee accepts by painting your house. But what constitutes lawful "performance" under these circumstances? The act of beginning to paint your house or completely finishing the job to your satisfaction?

Most courts would rule that the act of beginning performance under these circumstances converts a unilateral contract into a bilateral contract, requiring both parties to fulfill the obligations contemplated by the contract. However, other courts would analyze the facts of each case so as not to frustrate the reasonable expectations of the parties. In neither of these cases are the legal rights of the parties ultimately determined by the courts by applying the concepts of unilateral and bilateral contracts.

If a minor enters a bilateral contract with an adult that is unenforceable due to the minor's age, the adult party cannot assert absence of mutuality as a defense if the minor sues to enforce the contract. This principle applies to any situation where the law grants a particular party a privilege to avoid a contract because of his or her status.