Sandy Murphy, who had lived with Binion for 3 and one-half stormy years before his death, was soon busy in civil court chasing what she claimed was her share of Binion's $50 million estate. Murphy was initially awarded a share, but the Binion estate appealed and that case went to the Nevada Supreme Court. 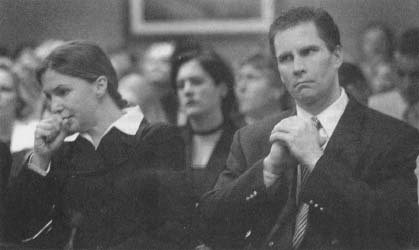 For months following Binion's death, Murphy appeared to be the emotionally overwrought girlfriend, devastated at finding her lover dead in their home. Intense media coverage, augmented by a public relations team, seemed to rally the public to her side. Chief Clark County Medical Examiner Lary Simms initially ruled that Binion had died of an accidental overdose of heroin and Xanax intoxication while suggesting suicide was a possibility. Binion had recently lost his gaming license because of his drug use and association with a mob figure.

None of this rang true for Binion's sister, Becky Behnen, who ran the family's Horseshoe Club. She hired a private investigator, Tom Dillard. Dillard dug up incriminating evidence against Murphy and Tabish, a debt-ridden Montana father of two fighting to save his contracting business, who Binion had befriended after a chance meeting in a Las Vegas motel bathroom. According to Dillard, the two had begun an affair behind Binion's back in the summer of 1998. Dillard further found that the day before his murder, Binion had cut Murphy out of his will. Right after Binion died Murphy and Tabish looted Binion's home of rare coins, silver and cash stashed in closets, pants pockets, and even in the engine compartment of a boat stored in his garage.

Based on Dillard's findings, a new theory emerged that the levels of heroin and Xanax in Binion's body were so lethal that he could only be a victim of a forced overdose. Police began to investigate the death as a homicide. Medical examiner Simms later concurred that Binion had been murdered.

On June 24, 1999, police arrested Murphy and the 34-year-old Tabish. They were charged with first-degree murder, grand larceny, and burglary.

During a 13-day preliminary hearing in September 1999, Chief Deputy District Attorney David Roger revealed a new theory to explain Binion's death: He was suffocated. The prosecution brought to the case a New York pathologist of national repute, Dr. Michael Baden, who also had testified in the well-publicized O.J. Simpson case. Baden testified that he believed the levels of heroin and Xanax in Binion's system were not enough to kill him, as the local medical examiner had concluded.

Baden, who had conducted more than 40,000 autopsies in his 40-year career, said congestion under Binion's eyelids and abrasions on his chest and back indicated he was suffocated in a nineteenth-century method called "burking." This occurs when someone sits on the victim's chest while covering his mouth and nose. Prosecutors built their circumstantial case around Baden's testimony. They contended that when Binion's gardener had unexpectedly arrived at the mansion, Murphy and Tabish were forced to suffocate Binion instead of letting the lethal drug cocktail work.

The defense, not to be outdone, brought in a well-known Milwaukee attorney, James Shellow, specifically to demean and discredit Baden. This ploy may have backfired. News reports indicate that Shellow's abrasive style may have alienated jurors, some of whom appeared to bond with Baden.

The defense also called on a pathologist with a national reputation, Pittsburgh's Cyril Wecht, who took the stand to contradict the prosecution's chief medical witness. Wecht, calling on 43 years of experience, disputed Baden's findings point by point. He testified that the ruptured blood vessels under Binion's eyelids were linear in fashion, not circular, which meant Binion was not suffocated. He said the discolorations around the victim's mouth and nose were not a result of being smothered to death, but more likely were caused by shaving. The marks on his chest possibly occurred in attempts to revive him.