SIGNIFICANCE: Former governor Edwin Edwards, who had served four terms as Louisiana governor (1972-1980, 1984-1988, and 1992-1996), was convicted of heading an extensive conspiracy during and after his last term, to extort bribes in the awarding of riverboat gambling licenses. The four-month federal trial of a popular state governor was marked by intensive local media coverage, an anonymous jury, and by the fact that the mail fraud charges that linked the crimes were, dismissed.

Governor Edwin Edwards had established a record over four decades as a successful and popular Democratic politician in Louisiana. His first three terms were marked by numerous achievements, including revision of the complex state constitution in 1974, reduction of taxes, and a vast increase in state services. Nevertheless, the fun-loving and popular politician was enmeshed in several scandals, including accusations that his wife had received a $100,000 gift while he served a term in Congress.

Edwards was accused in 1999 of having managed a scheme to extort bribes in exchange for riverboat casino licenses. Although federal prosecutors claimed that at least four casino companies paid the bribes, only two casino owners admitted to making payments.

The Louisiana Riverboat Gaming Commission, from 1992 through early 1996, consisted of a seven-member panel appointed by the governor. This commission evaluated applications for a total of 15 riverboat casino gaming licenses provided for by state law. The commission did not grant the licenses, but would issue certificates of preliminary approval. The commission was empowered to award 15 certificates. The Riverboat Gaming Division of the Louisiana State Police would grant the actual licenses, after conducting its own investigation and hearing to determine the suitability of an applicant. In March 1993, the commission awarded eight preliminary certificates, and in June 1993, the commission awarded seven more. The second round was highly competitive and received wide media attention. Fourteen of the 15 applicants that received preliminary certification were granted licenses by the State Police. The 15th applicant was at first denied by the police, but awarded after appeal. 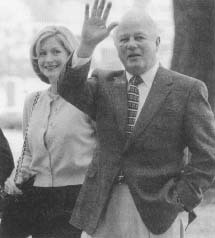 Governor Edwin Edwards and his wife Candy enter the courthouse where he was found guilty of extortion.

In early 1996, after Governor Edwards completed his fourth term, the state legislature created the Louisiana Gaming Control Board, with six members appointed by the new governor. The new board had one riverboat license to grant, and it received five applications for the single license that remained to be awarded.