Nathaniel hardly presented the image of a deadly killer. Wearing oversized prison garb, the 65-pound boy appeared tearful and bewildered at pre-trial hearings. But prosecutors argued that Nathaniel was exactly the type of juvenile offender the 1996 law had meant to target. Police had previously suspected him in almost two dozen crimes, including burglary and assault. For a variety of reasons, however, the boy had never been formally charged. 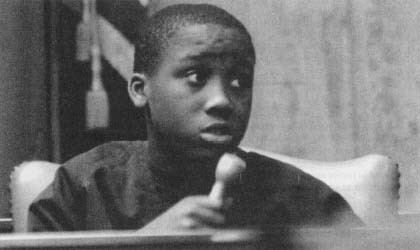 11-year-old Nathaniel Abraham became the youngest American convicted of murder as an adult.

Nathaniel's case drew the attention of attorney Geoffrey Fieger, who had previously defended "Dr. Death," Jack Kervorkian. Fieger took on the job pro bono and began a series of motions and appeals that delayed the trial until October 1999.

When the trial finally opened on October 29, prosecutor Lisa Halushka wrote down these words for the jury to read: "I'm gonna shoot somebody." This, she claimed, was what Nathaniel had said to his girlfriend days before the killing. As the trial progressed, Halushka called witnesses who supported the idea that Nathaniel's act had been a premeditated murder. He had stolen the rifle, then practiced target shooting at balloons. He had also fired the gun at a neighbor's house, barely missing the occupant, just before the fatal shooting. Later, Halushka noted that Nathaniel had told police conflicting stories about the shootings—proof that he knew what he had done, and that it was wrong.

Defense attorney Fieger argued that the shooting was an unfortunate accident. Nathaniel did fire the gun, yes, but was not trying to hit anyone. Fieger also introduced testimony from an expert marksman. The witness said that it would be almost impossible to deliberately hit a small target from more than 200 feet—the distance Nathaniel was from the victim—using the old, battered rifle the boy had fired.

Fieger also called on child psychologists to describe Nathaniel's mental state. The boy, these experts testified, had an IQ of 70, and at the time of the murder, his thought processes were like those of a seven-year-old. Fieger tried to prove that Nathaniel lacked the mental capacity to form the intent to kill. A prosecution psychologist witness, however, testified to rebut this claim.

Outside the courtroom, the trial provoked massive public interest. The CBS television magazine 60 Minutes profiled the case, and Oakland County Prosecutor David Gorcyca admitted the Michigan social system had failed to help Nathaniel in the past, despite his impaired intelligence and previous brushes with the law. Gorcyca said he owed the boy's mother, Gloria, an apology. An upset Mrs. Abraham replied, "Owe me an apology! To say the system failed but they still want to try my child as an adult? This is ridiculous."