When the FBI arrested him on February 15, 1995, in a Raleigh, North Carolina, apartment, Kevin Mitnick was either a master of victimless computer trespassing or a dangerous vandal whose intrusions into commercial computer sites had cost international companies millions of dollars. The argument over whether Mitnick was a felon or a mere nuisance would outlast his confrontation with the justice system.

Prior to his North Carolina arrest, Mitnick was already well known to the authorities and had previously been prosecuted numerous times for "hacking" or using the Internet to gain unauthorized access to computers. In 1981, as a teenager, he was convicted of burgling computer manuals from Pacific Bell and sentenced to probation. He served six months in jail in 1983 for breaking into computers at the University of Southern California. In 1987 he was arrested for hacking into the computers of a Santa Cruz software publisher and sentenced at that time to three years probation. In 1988, Mitnick was arrested for illegally copying software from Digital Equipment Corporation. During that trial, his defense attorneys argued that his hacking activities were an "addiction" and he was sentenced to a year in jail and six months in a halfway house.

In 1992, authorities planned to arrest Mitnick for hacking into Pacific Bell computers and for violating the terms of his parole by associating with Lewis DePayne, a longtime friend and also a convicted hacker. Alerted to the impending arrest, Mitnick disappeared. His hacking, however, continued. After he attacked the computers of California computer security expert Tsutomu Shimomura, Shimomura assisted the FBI in tracking Mitnick to North Carolina.

By the time Mitnick and DePayne were taken into custody in 1995, the federal government had compiled a substantial indictment against them: 25 counts of computer crimes including possession of unauthorized access devices, computer fraud, causing damage to computers, wire fraud, and interception of wire or electronic communications. The indictment accused the pair of fraudulently obtaining unauthorized access to computers belonging to software and operating systems manufacturers, cellular telephone manufacturers, internet service providers, and educational institutions. They allegedly used the information to steal and copy proprietary computer software from Motorola, Nokia, Fujitsu, Novell, NEC, and Sun Microsystems. Mitnick and DePayne were also charged with fraudulent acquisition and possession of hundreds of confidential computer passwords. 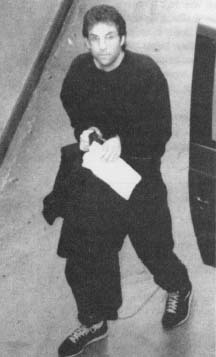 Prosecution of computer hacker Kevin Mitnick was the first case to focus attention on computer security.