In November 1993, Shakur was arrested after a 19-year-old fan reported to police that she had been with the performer in a New York hotel room when several of his friends came in and, led by Shakur, forced her to perform oral sex on them. Shakur and his road manager, Charles Fuller, were taken into custody and charged with three counts of first-degree sexual abuse, sodomy, and illegal possession of a firearm after police found two guns in the hotel room. (One of the other two men involved was not apprehended, and the fourth eventually faced a separate trial.) 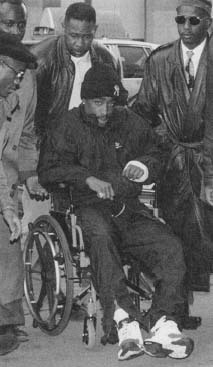 Tupac Shakur, injured in a shooting, arrives at court for his trial.

From the beginning of Shakur's trial, which began almost one year after the alleged incident had taken place, everyone involved seemed to expect a sleazy and dramatic courtroom battle. Justice Daniel P. Fitzgerald removed two jurors because they had been overheard voicing their disgust with the defendant and his music. Replacing the two jurors was a minor procedural hurdle for the court, but it was an omen of things to come.

Assistant District Attorney Francine James began the state's case against Shakur by calling the accuser to the stand. (As is often the case in rape or sexual assault cases, the media did not report the victim's name to protect her privacy.) She told the jury that she had met Shakur at a Manhattan nightclub several days before the alleged attack. During this first encounter, she acknowledged performing oral sex on Shakur, just half an hour after having met him. Later, the two returned to Shakur's hotel suite for the night. She testified that the next day she called and left a message on his voice mail complimenting him on his sexual prowess from the night before.

Four days after this first encounter, she returned to Shakur's hotel suite to retrieve something she had left there. She testified that she and Shakur had been in his room kissing when three of his friends burst in and attacked her. According to her version of events, Shakur grabbed her by the hair and began tearing her clothes off, while the other three fondled her. Earlier, in a statement given to prosecutors, she had quoted Shakur as telling her that she was "a reward for his friends" and that "millions of other women would be happy to be in her situation." During cross-examination defense lawyer Michael Warren tried to discredit the alleged victim's story, insinuating to the jury that it had been a consensual encounter with jealousy as the motive.

The defense called only one witness to the stand, Shakur's publicist, Talibah Mbonisi. She testified that on the night in question she had returned to the hotel suite and was told that Shakur was with a woman; she heard no noises coming from the adjoining room. Some time later, according to her testimony, he came in and was talking to her when the victim burst in and demanded to know who he was with and why had he just had sex with her if he had someone else waiting for him.

Shakur later told reporters that his accuser was out to get him because she had seen him with another woman. Warren used the same theory in his argument to the jury, contending that the second sexual encounter with the rap star was as consensual as the first and that the allegations were made to punish Shakur for spurning her for someone else.

After both sides finished presenting their arguments, the judge charged the jury, defining for them the elements necessary for each offense to be valid, providing the definition of "beyond a reasonable doubt," and giving them the parameters within which they were required to make their decision. The judge sequestered the jury during their deliberations, so they were unaware of the next event to take place during the trial.