Four days later, a New York Times/CBS News Poll found 53 percent of Americans said a doctor should be allowed to assist an ill person in taking his or her own life. But Judge Alice Gilbert of Michigan's Oakland County Circuit Court ordered Kevorkian to stop using his machine. Talk shows, newspaper and magazine editorials and Op-Ed pages, nursing homes, medical and legal societies all vibrated with the debate over the ethical issue. "I'm trying to knock the medical profession into accepting its responsibilities," explained Kevorkian, "and those responsibilities include assisting their patients with death."

In December, Oakland County prosecuting attorney Richard Thompson charged Kevorkian with first-degree murder. But, Oakland County District Court Judge Gerald McNally found no probable cause that the doctor had committed murder, because Michigan had no law against assisting suicide.

The prosecutor asked the court to forbid Kevorkian to regain possession of his "death machine" from the police, build another like it, or help anyone else build one. Defense lawyer Geoffrey Fieger argued that, since the doctor had been cleared of criminal charges, the prosecution had no legal basis for its request. On February 5, 1991, Judge Gilbert ruled that Dr. Kevorkian could no longer use the machine.

Two days later, on February 7, the doctor told reporters he intended to use the machine again. In October 1991, in a remote cabin outside Pontiac, Michigan, he helped two women kill themselves. One, who had multiple sclerosis, used a somewhat different intravenous device. Instead of pushing a button, as Janet Adkins had done, the MS victim had two strings attached to her fingers. She pulled the first to activate the anesthetic. Then, as she lost consciousness, her falling arm pulled the second string to start sending sodium Pentothal, a poison, into her system. The other woman, who suffered from a pelvic disease, breathed carbon monoxide, a poisonous gas. Upon hearing of the deaths, Judge McNally commented to an AP reporter, "There is a place for this in society. You can't put this in dark alleys or cabins." 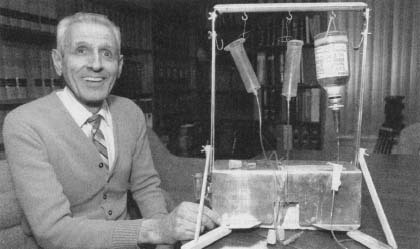