The case did not end there, however, and the next twist was even more astonishing. The defense petitioned for a new trial, claiming that Holloway's conviction—her entire trial, in fact—had been invalid. Her attorneys correctly claimed that one of the jurors had been technically ineligible for jury duty because of a felony drug arrest. During the jury selection, Daniel Enriquez had truthfully answered yes when asked if he had been involved in a criminal case, but the judge incorrectly assumed that Enriquez had served his sentence. Furthermore, he had not responded when the judge asked if any of the prospective jurors were on probation, for Enriquez had served on a different jury several months earlier before a judge who had assured him that his legal problems did not render him ineligible for jury duty. Although observers suspected the defense of knowing the truth about the juror's ineligibility all along, the result was the same under Texas law. The entire Holloway trial and its verdict were voided. She was granted a new trial on November 8.

Holloway's peculiar celebrity continued while she awaited retrial. Two madefor-television films were aired about the case, "Willing to Kill: The Texas Cheerleader Story," and a tongue-in-cheek HBO production, "The Positively True Adventures of the Alleged Texas CheerleaderMurdering Mom." 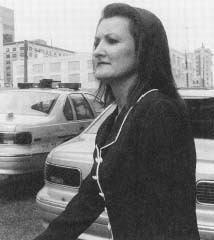 Wanda Halloway leaves jail after being freed on probation for trying to hire a hitman to kill the mother of her daughter's cheerleading rival.

Eventually, the justice system got around to confronting Holloway with her responsibility for the crime she had planned.On September 9, 1996, a month before her second trial was to begin, she pleaded no contest and was sentenced to 10 years imprisonment. Lawyers on both sides were dissatisfied with the sentence. Holloway's attorneys continued to insist that their client was being jailed unfairly, while prosecutors were irritated by the fact that she could be paroled after serving only six months. The Heaths, who were initially content with the sentence, were less comfortable when the prosecution's prediction came true. After spending half a year in a state prison, Holloway was placed on probation for the remainder of her sentence and ordered to serve 1,000 hours of community service. She was freed and immediately disappeared from the headlines.

"I think it was probably a case of a mother trying to live her life through her daughter," said George Helton, one of the detectives whose investigation led to Holloway's arrest. "Reasonable people like you and me can't understand how in the world cheerleading can be so important, but I think these people are just a bubble off."