SIGNIFICANCE: This trial marked the first prosecution of a television evangelist on charges of duping his followers.

For years Jim Bakker's Praise The Lord (PTL) ministry had been the most successful television program of its type. Following the exposure in 1987 of an affair with assistant Jessica Hahn, his financial empire began to crumble. An investigation into the workings of PTL led to 24 indictments charging that Bakker had defrauded the public of millions.

Between 1984 and 1987, PTL supporters paid $158 million to obtain "lifetime partnerships" in Bakker's Heritage USA theme park, Assistant U.S. Attorney Jerry Miller alleged when testimony began August 28, 1989. Miller explained how the $1,000 partnerships were supposed to entitle the contributor to three nights' lodging a year for life at Heritage USA. But with accommodations for just 25,000 vacationers, Bakker oversold an additional 43,000 memberships, diverting $3.7 million to his own personal use. According to Miller, Bakker used PTL to "cheat people out of their money … [with] a disdain for all those around him."

George Davis, defending, said that Bakker admitted the facts of the case but denied any wrongdoing. "He was," argued Davis, "a creative, religious genius."

Further evidence of extravagance came from Steve Nelson, an ex-PTL vice president, who also spoke of warning Bakker about the overbooked vacation deals. "I told him that I thought we had some big-time problems. I specifically said, "Someone could go to jail for this.' He told me not to worry, that there was always room at the inn." Seconds after giving his testimony, Nelson collapsed in court. At the behest of his lawyer, Bakker prayed gently at Nelson's side while paramedics administered treatment.

The next day it was Bakker's turn to require medical attention. He had been found beneath a desk in his lawyer's office, huddled in a fetal position, apparently hallucinating. "Please don't do this to me," he sobbed, as he was led away in shackles for psychiatric evaluation. 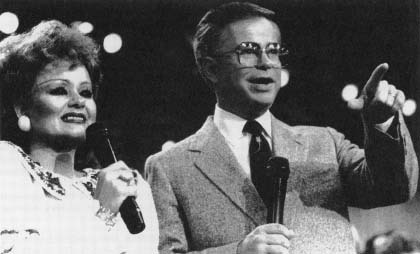 One week later Bakker was back in court to hear former aide Richard Dortch agree with prosecution contentions that the partnerships had been a classic "pyramid scheme." Dortch quoted Bakker as saying, "There's no limit to the amount of people we can offer them to, because I can control the crowds of people as they come."