Coffee and Weddington decided to attack the constitutionality of the Texas abortion law on the grounds that it violated the Fourteenth and Ninth Amendments to the U.S. Constitution. The due process clause of the Fourteenth Amendment guaranteed equal protection under the law to all citizens and, in particular, required that laws be clearly written. Physicians accused of performing illegal abortions usually cited the Fourteenth Amendment in their defense, claiming that the law was not specific enough with regard to when a woman's life might be considered threatened by pregnancy and childbirth. However, since Coffee and Weddington wanted a decision that rested on a pregnant woman's right to decide for herself whether or not an abortion was necessary, they based their argument first and foremost on the Ninth Amendment, which states: "The enumeration in the Constitution, of certain rights, shall not be construed to deny or disparage others retained by the people." Until 1965, this had usually been interpreted to mean that rights not specifically granted to the federal government were retained by the states. In 1965, however, Griswold v. Connecticut reached the Supreme Court and prompted a different interpretation of the amendment. Estelle Griswold, Planned Parenthood League of Connecticut's executive director, and Dr. Charles Lee Buxton had been arrested for providing birth-control information and contraceptives, actions then illegal under Connecticut law. Found guilty in the Connecticut courts, the two appealed to the Supreme Court, which overturned their convictions and ruled the Connecticut law unconstitutional. Of particular note to Coffee and Weddington was Justice William 0. Douglas' discussion of the Ninth Amendment in his majority opinion. Rights not specifically listed in the Constitution were retained by the people, Douglas emphasized, and one of these rights was the right to privacy. This right to privacy, Coffee and Weddington would argue, should certainly protect the right of a woman to decide whether or not to become a mother. 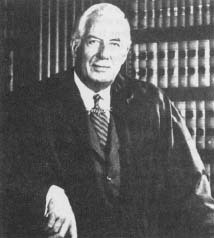 Chief Justice Burger voted with the majority in the Roe v. Wade decision which affirmed a woman's "fundamental right" to privacy in the area of choosing whether or not to have an abortion.

John Tolles was the assistant district attorney chosen by District Attorney Henry Wade to defend his enforcement of the Texas abortion law. Attorney General Crawford Martin chose Robert Flowers, head of the enforcement division, to defend the Texas law itself, and Flowers passed this task on to his assistant chief, Jay Floyd. The state prepared its case primarily on the basis that a fetus had legal rights, which ought to be protected.