Despite having assembled an imposing team of attorneys, Davis chose to make the opening defense address herself. Wisely, she kept the political rhetoric to a minimum, preferring to underscore serious flaws in the prosecution's case—the fact that she had bought the shotgun quite openly in her own name, and, more importantly, her insistence that the Marin shooting had nothing to do with George Jackson. "The evidence will show that there's absolutely no credible proof of what the precise purpose of August 7 was." 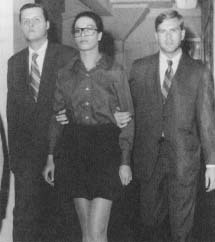 This argument was countered by a prosecution witness, news photographer James Kean. He had taken several photographs of the incident and testified to hearing McClain say, "Tell them we want the Soleded Brothers released by twelve o'clock."

Chief defense attorney, Leo Branton cross-examined: 1 his remark that was made about freeing the Soleded Brothers—it was the last thing that was said just as the group got on the elevator. is that a fact?"

"You never heard Jonathan Jackson say anything about free the Soleded Brothers, did you?"

"You didn't hear anybody say it other than McClain and it was the last thing he said as he headed down the elevator; is that right?"

"As though it were a parting gesture, is that correct?"

Branton must have been satisfied, and even more so when Deputy Sheriff Theodore Hughes testified that he had heard some of the escapees shout clearly, "Free our brothers at Folsom, free all our brothers." Again, no reference to Soleded.

Less easy to dispose of was the prosecution's star witness, Gary Thomas. Permanently paralyzed by his bullet wound, he was brought into court in a wheelchair. The key part of his testimony was an insistence that he had seen Magee shoot Judge Haley with the shotgun. Thomas recalled that he "watched the right side of the judge's face pull slowly away from his skull."

Branton had the unenviable task of attempting to prove how Thomas' recollection might have been clouded by the trauma he had suffered. "Isn't it a fact, sir, that the first fusillade of shots that came into the van killed both Jonathan Jackson and McClain, and that you thereupon grabbed the gun that McClain was holding … and that you turned around and began firing into the back of the van … and that you hit Christmas and you hit Magee, and you possibly even hit Judge Haley?"

Thomas angrily refuted the assertion and Branton had to back down. He made little headway with Thomas, apart from getting the witness to agree that at no time did he ever hear anyone mention the Soleded Brothers.