The prosecution's opening statement, delivered by David Fitts on February 12, 1979, was packed with examples of Sirhan's devious and deliberate preparations for murder. Just two nights before the attack, he was seen at the Ambassador Hotel, apparently attempting to learn the building's layout, and he visited a gun range on June 4 to polish his already considerable skills with the pistol. However, the testimony of one prosecution eyewitness to the attack, author George Plimpton, backfired when he described Sirhan as looking, "… enormously composed. He seemed—purged," a statement which dovetailed neatly with the defense assertion that Sirhan had shot Kennedy while in some kind of trance. More on track was the testimony of Alvin Clark, Sirhan's garbage collector, who claimed that Sirhan had told him a month before the attack of his intention to shoot Kennedy. 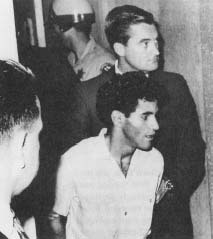 Sirhan Sirhan in custody the day after he shot Senator Robert F. Kennedy. Despite his admission of guilt, a lengthy trial followed.

Defense hopes of proving that this killing had been the spontaneous act of a deranged mind received a severe setback when Judge Walker admitted into testimony pages from three notebooks that Sirhan had kept. They revealed a mind seriously troubled, but quite calculating and willful. One entry written May 18, 1968, read: "My determination to eliminate R.F.K. is becoming the more and more [sic] of an unshakable obsession.… Robert F. Kennedy must be assassinated before June 5, 1968."

Sirhan's behavior throughout the trial, always bizarre, reached a self-destructive zenith during some unwelcome testimony about his childhood. He raged: "I … withdraw my original pleas of not guilty and submit the plea of guilty as charged on all counts. I also request that my counsel disassociate themselves from this case completely."

Bemused, Judge Walker asked, "What do you want to do about the penalty?"

"I will ask to be executed," Sirhan replied coolly, an announcement which prompted a cavalry charge of reporters for the exits. Judge Walker continued, "This court will not accept the plea. Proceed with the trial." When Sirhan's counsel then attempted to withdraw of their own volition, Walker denied this also. It was all very confusing. Ultimately, order was restored and Sirhan took the stand.

"Did you bear any ill will towards Senator Kennedy?"

"Do you doubt you shot him?"

Cooper then steered Sirhan into the reasons for his attack on Kennedy, a vicious diatribe about the Middle East conflict between Arab and Jew. So impassioned was Sirhan's anti-Zionist rhetoric that one of his own lawyers, Emile Berman, a Jew, felt compelled to offer his resignation from the defense team. Only soothing words from Cooper made him stay.