The Berrigans were promptly arrested, and once again they were charged with violations of federal law. The Catonsville incident, however, sparked a nationwide wave of sympathetic anti-Vietnam demonstrations unlike anything generated by the Baltimore Customs House affair. For example, in Milwaukee, Wisconsin a group of Catholic activists stormed a Selective Service office and burnt over 10,000 files.

The trial began on October 7, 1968 before Judge Roszel C. Thomsen in Baltimore, Maryland. The Berrigans' lawyers were Harrop Freeman and William Kunstler, and the federal prosecutors were Stephen H. Sachs and Barnet D. Skolnik. Philip Berrigan testified that his moral opposition to the Vietnam War led him to participate in the Catonsville incident:

We have been accused of arrogance, but what of the fantastic arrogance of our leaders? What of their crimes against the people, the poor and the powerless? Still, no court will try them, no jail will receive them. They live in righteousness. They will die in honor. For them we have one message, for those in whose manicured hands the power of the land lies. We say to them: lead us. Lead us in justice and there will be no need to break the law.

Daniel Berrigan's testimony and that of the rest of the "Catonsville Nine" was similar to Philip Berrigan's. They had all entered the Selective Service office and burnt the files because of their belief that America's involvement in Vietnam was wrong. All of the defendants understood that they were breaking the law, but they asserted that their higher purpose in attempting to save human lives justified their actions. The prosecutors scornfully replied in their closing argument that:

Our problems are not going to be solved by people who deliberately violate our laws, the foundation and support for an ordered, just, and civilized society.

Before the jury retired to deliberate, Daniel Berrigan made an impassioned plea to Judge Thomsen to interpret the law not according to its technical requirements, but according to the dictates of human morality. Berrigan argued that the judge and the jury were responsible to a higher authority than the law, and that if they believed as he did that the Vietnam War was wrong, they could acquit him and the others.

Thomsen was clearly sympathetic to these antiwar sentiments, but he knew that his office as judge was to uphold the law. Thomsen replied to Daniel Berrigan that:

You speak to me as a man and as a judge. I would be a funny sort if I were not moved by your sincerity on the stand, and by your views. I agree with you completely, as a person. We can never accomplish, or give a better life to people, if we are going to keep on giving so much money to war. It is very unfortunate but the issue of war cannot be presented as clearly as you would like. The basic principle of the law is that we do things in an orderly fashion. People cannot take the law into their own hands. 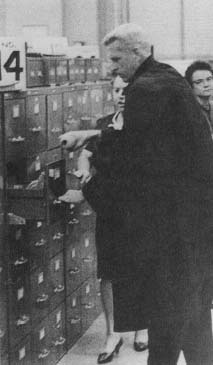 The Rev. Philip Berrigan pouring blood on draft records at Selective Service headquarters to protest the "pitiful waste of American and Vietnamese blood' in Southeast Asia.

The Berrigans' lawyers appealed the convictions to the United States Court of Appeals for the Fourth Circuit, whose jurisdiction includes Maryland. On June 10, 1969, both sides made their case to the court of appeals, which issued its decision on October 15, 1969. One of the most interesting issues that the court had to consider was the defense's argument that the jury should have been free to acquit the defendants if they chose to do so regardless of the defendants' obvious guilt:

Concededly, this power of the jury is not always contrary to the interests of justice. For example, freedom of the press was immeasurably strengthened by the jury's acquittal of John Peter Zenger of seditious libel, a violation of which, under the law as it then existed and the facts, he was clearly guilty. In that case Andrew Hamilton was allowed to urge the jury, in the face of the judge's charge, to see with their own eyes, to hear with their own ears, and to make use of their consciences and understanding in judging of the lives, liberties, or estates of their fellow subjects.

However, the court affirmed the Berrigans' convictions, noting that the jury's freedom to do as it pleased had been greatly curtailed in modern times. No matter how noble the Berrigans' cause, the law could not sanction their criminal acts, because the alternative was to permit every group with a particular political viewpoint to do as it pleased:

If these defendants are to be absolved from guilt because of their moral certainty that the war in Vietnam is wrong, would not others who might commit breaches of the law to demonstrate their sincere belief that the country is not prosecuting the war vigorously enough be entitled to acquittal?

The Berrigans and the rest of the Catonsville Nine went to prison. Their defense, which rested on their moral opposition to the Vietnam War, was not recognized by the courts as a legal defense to criminal conduct. In essence, Judge Thomsen and the judges of the Fourth Circuit had held that there was no place in the law for the belief that "extremism in the defense of liberty is no vice."