SIGNIFICANCE: Twice frustrated in attempts to convict Collie Leroy Wilkins for the murder of Viola Liuzzo, federal prosecutors successfully prosecuted Wilkins with an 1870 law for depriving Liuzzo of her civil rights.

On March 25, 1965, thousands of civil rights marchers converged on the Alabama state capitol in Montgomery, demanding an end to obstacles to black voter registration. The day of speeches ended a 54-mile march from Selma, where civil rights protesters had been gassed and beaten by police, arrested, and murdered during the previous three months.

That evening, a white volunteer from Michigan named Viola Liuzzo and LeRoy Moton, a black teenaged civil rights worker, ferried marchers back to Selma, then headed toward Montgomery for another carload. Near the rural town of Hayneville, a car traveling at nearly 100 miles per hour overtook them. As Liuzzo looked at the men in the car speeding alongside her, one of them shot her in the face, killing her. Her Oldsmobile drifted off the road into a ditch. Terrified but unharmed, LeRoy Moton saved his life by pretending to be dead when the attackers returned to look for survivors.

Gary Thomas Rowe Jr., Eugene Thomas, William Orville Eaton, and 21old Collie LeRoy Wilkins, Jr., were quickly arrested. All four were members of the Ku Klux Klan. Unbeknownst to the others, Rowe was also a paid FBI informer, a fact which hastened their arrest and was to figure prominently in their trials.

Wilkins was tried first on a state murder charge. His attorney was Matt J. Murphy, Jr., a Klan lawyer or "Imperial Klonsel." Robert Shelton, "Imperial Wizard" of the United Klans of America, sat at the defense table until the judge ordered him to move to a spectator's seat.

LeRoy Moton quietly described the high-speed chase. Interrupted by laughter from Klansmen in the Hayneville court, he endured a cross-examination in which Murphy implied that Moton had shot Liuzzo to rob her. Prosecutors replied with an FBI ballistics report linking the bullet that killed Liuzzo to a revolver found in Eugene Thomas' house.

Gary Rowe described how the four Klansmen had noticed Liuzzo and Moton at a traffic light. Thomas, who was driving, suggested that they "get 'em." As their car gained on Liuzzo's on a desolate stretch of highway, Thomas handed his pistol to Wilkins. Wilkins said that forcing the other car off the road was too risky, for telltale paint scrapes could land them in jail. He told Thomas to speed up. When the cars were even, Wilkins fired twice.

"Shoot the hell out of it," Thomas ordered. Rowe claimed he stuck his weapon out the window, but only pretended to fire with Wilkins and Eaton.

Murphy cross-examined Rowe angrily. He recited part of the oath in which Klansmen swore to die rather than divulge secrets, resisting any "bribe, flattery, threats, passion, punishment, persecution, persuasion, [or] any other enticements."

"Did you hold up your hand before God and swear to these matters?" Murphy said.

"Yes, I believe I did," Rowe replied.

Murphy did not call Wilkins to testify. He did, however, give a vitriolic hour-long summation mingling Old Testament references with Klan doctrine. Murphy raged against blacks, Jews, Catholics, Communists, miscegenation, President Lyndon Johnson, and the National Association for the Advancement of Colored People. He called Rowe a perjurer, "a pimp," and "a white nigger."

Prosecutors told jurors that regardless of how they felt about the civil rights movement, this was a case of cold-blooded murder. Alabama Assistant Attorney General Joseph Gantt quoted segregationist Governor George Wallace, who had called Liuzzo's murder "a cowardly act that should not go unpunished."

The jury returned deadlocked, with 10 members voting for conviction. Some had stared at their hands in embarrassment during Murphy's closing speech. "He must have thought we were very, very ignorant to have been taken in by that act," said one juror. The two holdouts belonged to the white racist Citizens Council. One would not accept Rowe's testimony because the Klansman "swore before God and broke his oath" by becoming a paid informer.

When Wilkins' retrial convened, Alabama Attorney General Richmond Flowers took over the prosecution. He questioned potential jurors about their racial attitudes. Of 30 white males called for jury duty, 11 believed that white civil rights workers like Liuzzo were inferior to other whites.

Alabama law allowed Flowers to disqualify only six jurors with peremptory challenges. Because he was allowed limitless challenges "for cause-removal based on a distinct reason affecting a juror's fitness to serve;" Flowers declared that racial bias was a reason to disallow jurors. "How can the State of Alabama expect a fair and just verdict in this case from men who have already sat in judgment on the victim and pronounced her inferior to themselves?" 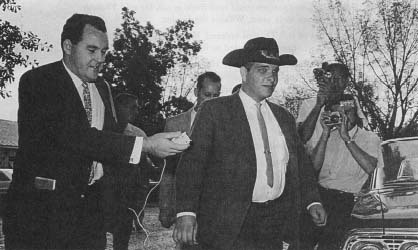 The U.S. Justice Department then pressed an indictment against Wilkins, Thomas, and Eaton, using a Reconstruction-era law. The 1870 statute made it a felony "to conspire, to injure, oppress, threaten, or intimidate any citizen in the free exercise or enjoyment of any privilege secured to him by the Constitution or laws of the United States."

Federal prosecutor John Doar argued that the law applied to Viola Liuzzo because the Selma-to-Montgomery Freedom March had been sanctioned by a federal court order after state officials tried to prevent it. Ironically, the court order had been signed by U.S. District Judge Frank M. Johnson, Jr. who would preside over the conspiracy trial.

Gary Rowe testified that he and the defendants had spent March 25 looking for marchers to harass upon orders from their Klan superiors. Defense attorney Hanes accused Rowe of fabricating his story for money and repeated the strategy of reading portions of the Klan's secrecy vow aloud.

When Rowe agreed that the words were "part of the oath" he had taken, Judge Johnson instructed Hanes to read the rest of the oath. Hanes unwillingly read the entire pledge, in which "knowledge of rape, treason against the United States, [or] malicious murder" voided the vow of silence, enjoining Klansmen to "help, aid, and assist" law enforcement officers.

After a day of deliberations, the jury told Judge Johnson that they were "hopelessly deadlocked."

"You haven't commenced to deliberate long enough to be hopelessly deadlocked," the judge replied. He lectured the jurors on the cost and seriousness of the case, adding that it had to be decided eventually. He then delivered an "Allen charge"—also known as a "dynamite" or "shotgun" charge—asking minority-decision jurors to examine the reasoning by which they arrived at a decision contrary to the majority.

Four hours later, the jury returned with a guilty verdict. "If it's worth anything to you," Judge Johnson said, "in my opinion, that was the only verdict you could possibly reach in this case and reach a fair and honest verdict. I couldn't tell you that before. It wasn't my job." Johnson ordered the defendants to be imprisoned for 10 years, the maximum sentence.

William Eaton died of a heart attack three months later. After Wilkins and Thomas served their sentences, they appeared before a 1978 grand jury investigating Rowe's involvement in other violence against civil rights workers in the 1960s. They accused Rowe of shooting Viola Liuzzo. Testimony by the two convicted Klansmen and others resulted in Rowe's indictment for first-degree murder. In 1980, however, the indictment was overturned and Rowe remained in the federal witness protection plan.