On To The Supreme Court

The first action Planned Parenthood took in preparing Griswold v. Connecticut for the U.S. Supreme Court was to replace its female attorneys, Roraback and Pilpel, with two male attorneys: Fowler Harper and, upon his death, Thomas I. Emerson, both professors at Yale Law School. 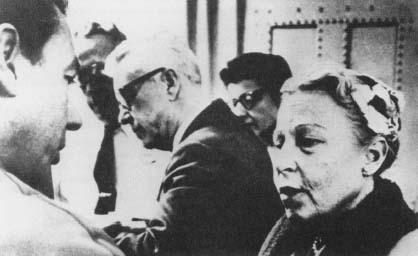 Oral argument began before the Supreme Court on March 29, 1964. Emerson argued that Connecticut's birth-control law deprived his clients and their clinic's patients of the First Amendment right to free speech and of their right to liberty, which according to the Fourteenth Amendment, could not be abridged without "due process of law." Moreover, he claimed that his clients had a right to privacy, which was guaranteed by the Ninth Amendment to the Constitution: "The enumeration in the Constitution, of certain rights, shall not be construed to deny or disparage others retained by the people."

Emerson characterized the Connecticut law as an effort to erect "a principle of morality" by declaring it "immoral to use contraceptives even within the married relationship." This was, he continued, a "moral judgment" that did not "conform to current community standards."

Both Emerson and Connecticut's attorney, Thomas Clark, were questioned about the presumed "under-the-counter" availability of birth-control devices in Connecticut. Clark classified it with clandestine bookmaking on racehorses—available, but not in the open. Emerson said the devices were simply termed "feminine hygiene" items. Clark was then asked whether it was permissible to prescribe contraceptives to prevent the spread of disease. Clark called this a "ludicrous argument" and explained that sexually transmitted disease was not present in married couples, who were claimed as clients of the Planned Parenthood clinic. As the New York Times summarized Clark's reasoning, "Connecticut requires applicants for marriage licenses to take venereal disease tests, and … Connecticut also has laws against fornication and adultery. Thus, [Clark] indicated, there would be no reason to believe that any such disease would spread."

The next day, Justice Potter Stewart asked Clark to explain the purpose of the statute. "To reduce the chances of immorality," he said. "To act as a deterrent to sexual intercourse outside marriage."

Justice Stewart replied, "The trouble with that argument is that on this record it [the clinic] involves only married women."

A little later in the questioning, Clark declared that Connecticut had the right to guarantee its own "continuity" by prohibiting contraceptives.

Justice Arthur J. Goldberg returned to the statute's alleged role in preventing intercourse outside of marriage, and he asked why Connecticut's laws banning fornication and adultery were not sufficient. Clark replied that "it's easier to control the problem" with the addition of anti-birth control laws.