John Henry Faulk, who was all Texas charm and folksy humor, was born and reared in Austin and went on to earn a Master's degree in English at the University of Texas, where he lectured on American folklore and English while studying for a doctorate. After the war, during which he served in the Merchant Marine, the American Red Cross, and the U.S. Army, Faulk began appearing on radio and television. By 1953, he was starring in his own talk show, playing popular music and commenting in his distinctive drawl on the news of the day.

His daily afternoon radio program on WCBS, in New York City, had high ratings and solid sponsors such as Libby's Frozen Foods by 1955. Faulk was well-liked by his colleagues and substituted regularly as a panelist on television game shows. He was, in fact, planning a full-time television career.

Like all broadcast performers, he was a member of the American Federation of Television and Radio Artists, known as AFTRA. Formed in 1938, AFTRA's New York local was the largest in the country. It was governed by a 35-member board of directors, elected by the membership every year. In the mid-1950s the board was dominated by an anti-Communist faction supporting Aware, Inc., a political group organized to fight "the Communist conspiracy in entertainment communications." In fact, Vinton Hayworth, the president of AFTRA in 1955, was also an officer of Aware, Inc.

Any performer who found his name in one of Aware's regularly issued bulletins was blacklisted and rendered unemployable in the industry. Sponsors, worried that their products would be linked to those accused of Communist sympathies, canceled advertising spots. Without explanation, performers were denied all opportunities, even 10-minute guest appearances. Careers and lives were quickly ruined. Victims disappeared into obscurity, including Jean Muir, the popular mother on "The Aldrich Family." Others, like Mady Christians and Philip Loeb, committed suicide.

Alarmed by the growing practice of blacklisting, several members of AFTRA, including Faulk, recommended that Aware, Inc. be condemned by the union membership. The vote was carried, 982 to 514, and a new slate was put up for election: Charles Collingwood, a former Rhodes Scholar and then a CBS news commentator; Gary Moore, popular on radio and television; and John Henry Faulk, among others. They called themselves "the middle of the road slate" to oppose Communism and blacklisting alike, to "oppose denial of employment by discriminatory and intimidating practices, especially by outside organizations."

The bitterly fought election brought an overwhelming victory for the "middlers." The highest number of votes went to Faulk, and with it the full force of an Aware assault. In the no-holds-barred, poison-pen campaign that followed, Aware sent letters to CBS executives warning that Faulk had "a significant Communist Front record."

Faulk vehemently denied the allegations. At the urging of CBS executives, he signed an affidavit saying so. Despite the assault behind the scenes, Faulk's show continued to register high ratings. He openly discussed the continued assault on his sponsors and their ad agencies with CBS executives, even urging them to sue sponsors who canceled advertising because of the unfounded accusations. When they refused, Faulk himself filed suit on June 26, 1956. CBS renewed Faulk's contract in December 1956, and in the year that followed, Faulk's earnings were the highest ever and his show was number two in the Nielsen ratings. His friend and manager Sam Slate assured him his job was secure. But in 1957, CBS fired Faulk while he vacationed with his family in Jamaica. The network told him it needed to make format changes and would. substitute Arthur Godfrey in his time slot. From that time on, with the exception of a guest appearance on Jack Paar's talk show, Faulk could not get a job. In 1959 he moved his destitute family back to Texas.

The evidence that banished Faulk from the entertainment industry and left him unemployed for 61/2 years began with a list of speaking engagements Faulk had made from 1946 to 1949. It stated, "According to the Daily Worker (the Communist newspaper) of April 22, 1946, Jack Faulk was to appear at Club 65, 13 Astor Place, N.Y.C.—a favorite site of pro-Communist affairs."

Unlike other Aware victims, Faulk fought back with the help of Louis Nizer, the most respected civil liberties lawyer of the day. Nizer determined first that Faulk's was a case of libel, but Nizer suspected a conspiracy, too. The suit was an opportunity to attack the blacklisting techniques that permeated the industry. To prove the case, Nizer would show how a few private citizens forced the entertainment industry, the fifth-largest industry in the United States, to secretly and illegally boycott its own employees.

The defendants in the case, representing Aware, Inc., were Vincent Hartnett and Laurence Johnson. Johnson, in his 70s, was the prosperous owner of a chain of New York state supermarkets. His criticism of a program or a performer brought anxious network executives to his Syracuse headquarters seeking absolution. Johnson's attack on Faulk took him to the Madison Avenue advertising agencies representing Faulk's sponsors. There he threatened that every supermarket in the country would boycott any product sold on Faulk's show.

Vincent Hartnett was also an entrepreneur, cashing in on the anti-Communist zeal as the principal contributor to Red Channels, a book citing the political activities of performers. It became the desktop reference during every casting call. In 1952, Hartnett, with Paul Milton, had formed Aware, Inc., a private consulting firm to screen artists. A former network employee himself, Hartnett charged broadcast networks and ad agencies $5 a head to research a performer's background. Hartnett's alliance with Laurence Johnson added economic muscle to back up the accusations. To deny or protest only brought more controversy for the victim, more letters, more threats. Almost without exception the accused slipped quietly away.

To win the libel suit, Nizer would have to overcome the obvious defense that what was written in the bulletin was true, Nizer had to show that Faulk, as a public figure, was maliciously attacked outside the bounds of fair comment. Although the truth of the speaking engagements was proven, the claim Faulk was a Communist sympathizer was not provable by a mere newspaper listing. Nizer established in pretrial testimony that Aware, Inc., Hartnett and Johnson could not verify any of the accusations against Faulk contained in the lengthy documents they had published and distributed. 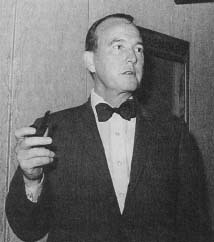 John Henry Faulk fought back when Aware blacklisted him and sought to destroy his television career.

In one dramatic pretrial session, Hartnett, in front of his attorney, Godfrey Schmidt, admitted to Nizer that his research consisted of "being sold a barrel of goods." Soon after, Schmidt was replaced by Roy Cohn as the chief defense attorney.