SIGNIFICANCE: Despite overwhelming evidence in favor of conviction, a jury deadlocked, primarily because racial tension had pervaded the jury room.

Rampant greed, sex, and a considerable dose of comedy ensured that this trial of a wealthy doctor and his mistress as joint defendants on charges of murder dominated newspaper headlines for months.

By 1959, Finch, 42, a wealthy Los Angeles, California physician, yearned to elevate his affair with 20-year-old Carole Tregoff to something more permanent. Standing directly in the path of this ambition was Finch's wife, Barbara, backed by the formidable California community property laws. Divorce would entitle Barbara Finch to half of Finch's estimated $750,000 fortune. Furthermore, if Barbara Finch could prove adultery—and there was every indication that she intended to do just that—Finch faced financial ruin, since the court could then apportion any percentage of the community property it deemed fit to the aggrieved party.

Unwilling to accept such a calamity, Finch and Tregoff schemed. In Las Vegas, Nevada, where Tregoff had gone to work, they attempted to hire someone, anyone, to seduce Barbara Finch, and thereby provide Finch with evidence for a countersuit of adultery. This notion brought them into contact with self-confessed gigolo John Patrick Cody, a seedy ex-convict entirely untroubled by matters of conscience. Talk of seduction soon turned to plans of murder. Cody assured the couple that homicide was also high on his list of accomplishments. After accepting a down payment of $350 and an airline ticket, Cody departed, ostensibly to kill Barbara Finch in Los Angeles. (Actually he spent the weekend with one of his several girlfriends.) A few days later he resurfaced and told Tregoff that the matter had been taken care of. She paid him the agreed balance of $850, only to learn later that Barbara Finch was still very much alive. Cody professed astonishment, then explained that he must have killed the wrong woman. For another couple of hundred dollars he promised to rectify the error. With this payment in hand, Cody disappeared, leaving Finch and Tregoff sadder, wiser, and infinitely more desperate. 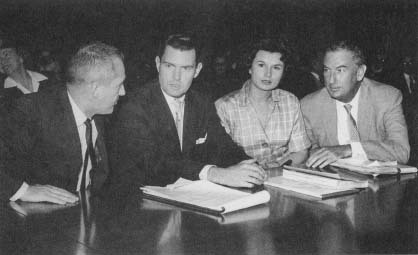 At 10:00 P.M. on July 18, 1959, the couple arrived at Finch's opulent house on Lark Hill Drive in suburban West Covina. Barbara Finch was not at home. Just over an hour later, she drove up in her red Chrysler. Finch went across to talk to her. A struggle broke out. At some point in the dispute, Barbara Finch was shot dead by a. 38-caliber bullet. For reasons never fully explained, Finch and Tregoff somehow became separated. Finch, after stealing two cars, made his way back to Las Vegas, where he was joined early the next morning by Tregoff. That same day, Finch was arrested and charged with murder. Eleven days later Tregoff was similarly charged.