On October 1, 1951, the plaintiffs filed a petition for appeal. Under certain special procedural rules, they were able to go directly to the U.S. Supreme Court instead of going through a federal court of appeals. On June 9, 1952, the Supreme Court put the case on its docket and consolidated it with several other cases from across the country where school segregation policies were being challenged. The Court scheduled a hearing for December 9, 1952, in Washington, D.C., during which the plaintiffs and the board of education would present their arguments.

Harold R. Fatzer and Paul E. Wilson represented the board. Brown and the other plaintiffs had a number of attorneys representing them at both the trial in the district court and now before the Supreme Court, all sponsored by the NAACP. The chief plaintiffs' lawyers were Robert L. Carter, Thurgood Marshall, Spottswood W. Robinson, and Charles S. Scott. The Supreme Court justices were Hugo L. Black, Harold H. Burton, Thomas C. Clark, William 0. Douglas, Felix Frankfurter, Robert H. Jackson, Sherman Minton, Stanley F. Reed, and Earl Warren.

The December 9, 1952, hearing ended in a stalemate. After listening to both sides reiterate the arguments they had made before the district court, the Supreme Court ordered another hearing, to take place December 8, 1953. The Court directed the parties to confine their re-argument to certain specific issues that especially concerned the justices, dealing mostly with the ratification of the Fourteenth Amendment by the states in 1868. Since the plaintiffs' lawsuit rested on the equal protection clause of this amendment, the Court wanted to know more about the circumstances surrounding the Amendment's adoption. For example, the Court was interested in the debates in Congress and in the state legislatures, the views of the proponents and opponents of the amendment, and existing segregation practices. Although the NAACP, Brown and the other plaintiffs were disappointed that their case would be on hold for another year, the Court's order for re-argument signaled its willingness to reconsider the separate-but-equal doctrine of Plessy. 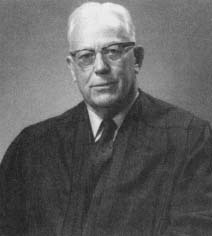