Trial of Julius and Ethel Rosenberg and Morton Sobell: 1951

A Jell-o Box Cut In Two

Taking the stand in his own defense, Julius Rosenberg denied a number of accusations made by prosecution witnesses. A Rosenberg console table that both Greenglasses charged had been a gift from the Russians, and which they said was adapted for microfilming, had been purchased at Macy's department store for "about $21." He testified that he had not given Ruth $150 for a New Mexico trip in November 1944, had not received information on the atom bomb from Greenglass, and had not introduced Greenglass to a man in New York who sought details of the bomb. He denied introducing a neighbor to Greenglass as an espionage courier. He had not cut a Jell-O box into two irregularly shaped pieces and given one to Ruth to be used as a recognition signal if she was succeeded by another courier, and had not said, "The simplest things are the cleverest," when David admired the idea. When Judge Kaufman asked whether he had ever belonged to "any group" that had discussed the Russian system of government, he said, "Well, your Honor, I feel at this time that I refuse to answer a question that might tend to incriminate me."

On cross-examination, Rosenberg defended his denials. But in response to questions from prosecutor Irving Saypol about his conversations with David Greenglass about money, he referred to "blackmail." Judge Kaufman asked about that word.

Rosenberg: He threatened me to get money. I considered it blackmailing.

Kaufman: Did he say he would go to the authorities and tell them you were in a conspiracy to steal the atomic bomb secret? 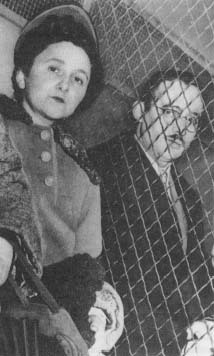 Ethel and Julius Rosenberg, separated by wire, following their conviction in March 1951.

The defendant's choice of words, jury members said afterward, seemed like an admission of guilt.

Ethel Rosenberg tersely denied all accusations. Like her husband, she took the Fifth Amendment when asked any questions about the Communist Party. Following cross-examination, defense attorney Bloch said, no more witnesses would be called.

On rebuttal, Saypol produced a surprise witness. Found by the FBI only the day before, photographer Ben Schneider testified that in June 1950 the Rosenberg family, saying they were going to France, had him shoot a large order of passport pictures. Another rebuttal witness testified that the Rosenbergs had told her the console table was "a gift from a friend," and that, despite the fact that it was their finest piece of furniture, they had kept it in a closet. (It was not put into evidence because the Rosenbergs said they did not know where it was at that time.)

The jury deliberated from late afternoon until nearly midnight, and for an hour the next morning, before finding both Rosenbergs and Sobell guilty as charged. A week later, on April 5, 1951, Judge Kaufman sentenced Sobell to 30 years and the couple to the electric chair.