Toguri was only one of an estimated 10,000 Japanese-Americans trapped in Japan during World War II and forced to cope with the circumstances of war. She, however, was one of the few singled out for punishment by the American authorities. She was arrested in occupied Japan on October 17, 1945, released on October 25, 1946, when the Justice Department expressed doubts on the charge of treason against her, but re-arrested on August 28, 1948, in Tokyo. She was brought back to the United States to stand trial in San Francisco, California. 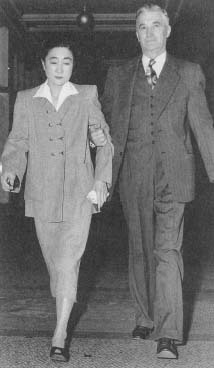 Tokyo Rose is being escorted in the federal building in San Francisco by U.S. Deputy Marshal Herbert Cole just before the court found her guIty of treason.

In the anti-Japanese climate of postwar California, Toguri had to struggle to find lawyers to represent her, but finally Wayne M. Collins, George Olshausen, and Theodore Tamba agreed to take her case for free. The prosecutors were Thomas DeWolfe, Frank J. Hennessy, John Hogan, and James Knapp. The trial began on July 5, 1949 with Judge Michael J. Roche presiding.

Before an all-white jury, Toguri pleaded innocent to the eight treason charges against her. Despite Roche's bias in favor of the prosecution and the prevailing public sentiment against Toguri, the trial lasted for nearly three months and the jury was deadlocked. When the jury reported that it was unable to reach a verdict, Roche ordered them to continue deliberating until they had made a decision. Nine of the 12 jurors were willing to vote for a guilty verdict, and after some, time the three holdouts were cajoled to capitulate to the majority decision. One of the holdouts who reluctantly acquiesced in the guilty verdict was the jury foreman, John Mann:

She was such an inoffensive little thing. … I think I know how she felt because I felt the same way when I was cut off from everybody. You ask the judge a question and he reprimands you. He definitely tells you you're out of order. The count is nine to three against you. I couldn't help feeling the isolation she must have felt in Japan.

On September 29, 1949, the jury returned a guilty verdict against Iva Ikuko Toguri. She was sentenced to 10 years in prison and a $10,000 fine. After serving just over six years in a federal women's prison in West Virginia, Toguri was released early for good behavior. On January 18, 1977, and after decades of debate over the fairness of her trial, President Gerald Ford pardoned Toguri. Toguri was thus officially exonerated, and her U.S. citizenship was finally restored. Toguri's trial was one of only seven American treason trials following World War II.