For three weeks, the prosecution presented evidence. State Department witnesses identified the typewritten papers as cables from American diplomats around the world in 1938 and said the four memos were in Hiss' handwriting. An FBI typewriter expert testified that letters the Hisses wrote and all but one of the Chambers documents had been typed on the same machine.

The typewriter became a key piece of evidence. The Hisses said they had given it to the sons of their maid when they moved in December 1937—before the documents were typed in January and April 1938. One of the sons, Perry Catlett, testified to receiving the typewriter in December 1936 and taking it to a repair shop on K Street (where he was told it was not worth repairing), but then said, "I don't know the time" when prosecutor Murphy told him the K Street shop had not opened until September 1938.

The FBI searched unsuccessfully for the typewriter, a Woodstock built some 20 years earlier. Believing it world prove their client innocent, Hiss' own lawyers traced and found it, thus enabling a prosecution witness to demonstrate in the courtroom that it was in working order. 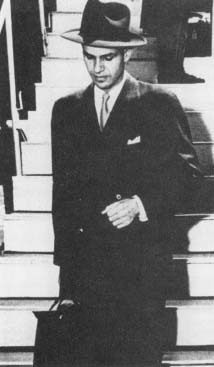 Alger Hiss arriving in the United States with the United Nations charter for delivery to President Truman.

On direct, examination, Hiss denied Chambers' charges and said, "I am not and never have been" a member of the Communist Party. He admitted having known one George Crosley between 1934 and 1936. Cross-examining, prosecutor Murphy tried to establish the gift of the Ford car and use of the Hisses' apartment as out-and-out fabrications.

Stryker's last witness was Dr. Carl Binger, a psychiatrist who had been observing Chambers' testimony. "Have you," asked Stryker, "an opinion within the bounds of reasonable certainty as to the mental condition of Whittaker Chambers?"

In summation, Murphy noted that the case must stand not on Chambers' accusations but on the documents and the typewriter. Said Stryker: "The case comes down to this—who is telling the truth?"

The jury deliberated for 14 hours and 45 minutes, remained deadlocked, and was discharged.