Even before the trial began April 4, 1948, Chessman, a cocky, street-smart hoodlum with an overinflated opinion of his own cleverness, created headlines by dismissing his lawyers and announcing that he intended to defend himself. It is impossible to overstate the enormity of this tactical blunder. Not only was Chessman on trial for his life, but he was facing Judge Charles W. Fricke, who in the course of his career sentenced more people to death than any other judge in California history. Right from the outset, Fricke made it plain that he regarded Chessman as an arrogant interloper, and he did everything possible to stymie the defense. When Chessman asked Fricke that he be given a daily transcript of proceedings, Fricke denied the request, something he had never done before in a capital case. Chessman's further complaint that he had not been shown the correct way to make a motion drew an outburst from Fricke: "Mr. Chessman, the court is not engaged in conducting a law school or advising a defendant what court procedure is." (As a matter of fact, so advising the defendant was exactly Fricke's duty in the case of a man conducting his own defense.) 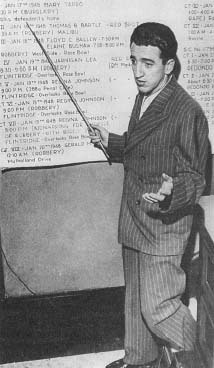 Caryl Chessman's fight as his own attorney unarguably contributed to his demise.

Neither did Chessman make much headway with the prosecutor, J. Miller Leavy. A 16-year veteran of capital cases, Leavy outmaneuvered his opponent at every turn. Never was this more apparent than during the jury selection process, when Chessman sat silently by and let Leavy impanel an 11-woman, one-man jury, something no experienced defense lawyer would have allowed in a sex case.

The first witness, Regina Johnson, described being taken from her car at gunpoint by a masked assailant to another vehicle where she was forced to commit a sexual act. (It was that distance between the two cars—22 feet—that made this a capital case. Technically, under California law at the time, she had been kidnapped. Those 22 feet meant the difference between a maximum sentence of 15 years for sexual perversion and death in the gas chamber.) "He told me that we would be taken away in a casket, the both of us, unless I did what he wanted." Briefly the attacker's mask had slipped, affording Johnson a glimpse of his face. She positively identified Chessman as the man.

On cross-examination Chessman emphasized discrepancies between Johnson's description of her attacker and himself. The bandit had been of undistinguished build and 5′8″ or 5′9″. Chessman was close to 6′ and almost 200 pounds. Johnson persisted in her identification. Then she went on the offensive. When Chessman asked, "Did this person … state what his intentions in taking you back to the other car was [sic]?" Johnson responded: "No, you didn't tell me until after I had gotten in your car."

"How long were you in the Ford?"

"In the car with you?" Johnson needled, sensing Chessman's increasing agitation. It worked. Chessman erupted, demanding of Judge Fricke that Johnson answer the questions as asked. Fricke denied the request, leaving Chessman to stew.

Another victim of the "Red Light Bandit," Mary Alice Meza, was less feisty but equally damaging. Asked by prosecutor Leavy if Chessman was her attacker, Meza replied, "There is no question. It is definitely him. I know what he looks like."

Chessman the witness was no more impressive than Chessman the lawyer. Leavy repeatedly trapped him in confusing and contradictory answers. Once, when taxed on responses made to police, Chessman replied, "Specifically, I don't remember what my answers were, because they were just fabrications."