No one who knew Tilden growing up would have picked him as a future super-athlete. He was a sickly child whose mother kept him out of school and tutored him at home. The Tildens had another son, Herbert, six years older. Herbert was a sturdy, handsome and outgoing boy who delighted his handsome, outgoing father. But Tilden Senior left the raising of his skinny younger son strictly to his wife. Linie Tilden constantly lectured little Bill on health, and especially, on the danger of venereal disease. He seldom saw children his own age. As a teenager, he hung around with younger boys and girls. He loved to play big brother, entertaining the other kids with stories and producing plays. He adored his own big brother, Herbert, an intercollegiate doubles champion, who taught him tennis. 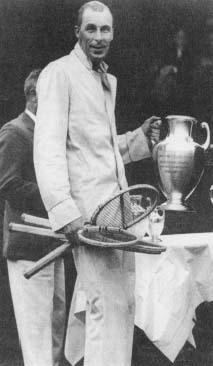 In 1911, while young Bill was at the University of Pennsylvania, his mother had a stroke and died. Four years later, both his father and brother died. Bill Tilden sank into a deep depression.

An older cousin told him to get interested in something, anything, or he'd waste his whole life. He became interested in tennis and began to study the game seriously. He studied opponents, too. He pinpointed their weaknesses and worked out strategies to deal with each. He combined this intellectual approach with superb coordination and the stamina of 10 ordinary men. In four years, he was champion of the world.

Tilden had no doubts about how good he was. He was the best, and he knew it. But as his nephew, William Tatem Tilden III, put it, "he never grew up." He was most comfortable with children and young teens. He coached a long succession of young boy proteges. He was a homosexual, but none of his proteges, all heterosexual, said he ever made any advances on them. In his glory years, people who knew Tilden thought he was asexual.

As champion, Tilden struck people as being unusually straitlaced, although given to frequent tantrums. He wrote hokey short stories extolling good sportsmanship and similarly moralistic plays, all of which flopped. He acted, too, in his own plays and those of recognized play-wrights. He adored actors and wanted to be one, but he always overacted. His lifestyle, especially his demeanor on the tennis court, was too dramatic for the stage.

Tilden feuded continually with the United States Lawn Tennis Association over expenses and other matters. In 1931, he decided to become professional.