Hitler's war loomed. Pound had strong opinions on world politics. Turned down when he suggested that the Italian Government put out publications that would improve American sympathy for Italian fascism, he proposed short-wave radio aimed at America. By January 1941, his "Europe calling! Pound speaking! Ezra Pound speaking!" was on the air regularly. Paid for his services, he urged America to stay out of the war and concentrated on anti-Semitism as his chief message. "Clever Kikes," he said, were "runnin' ALL our communications system." After Pearl Harbor, he declared (early in 1942):

America COULD have stayed out of the war… IF America had stayed neutral the war would now be over… For the United States to be makin' war on Italy AND on Europe is just plain damn nonsense … And for this state of things Franklin Roosevelt is more than any other one man responsible. 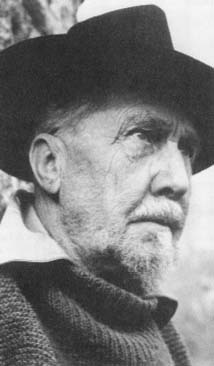 Treason charges against author Ezra Pound were finally dismissed based on the finding that he was unfit for trial.

America heard Pound. Attorney General Francis Biddle had him indicted for treason, the only crime that is defined in the U.S. Constitution:

Treason against the United States shall consist only in levying War against them, or in adhering to their Enemies, giving them Aid and Comfort. No Person shall be convicted of Treason unless on the Testimony of Two Witnesses to the same overt Act, or in Confession in open Court.

I do not believe that the simple fact of speaking over the radio … can in itself constitute treason. I think that must depend on what is said …

I obtained the concession to speak over Rome radio with the following proviso: Namely that nothing should be asked of me contrary to my conscience or contrary to my duties as an American citizen …

Learning of the indictment, Librarian of Congress Archibald MacLeish asked if it might not "confer the paraphernalia of martyrdom upon a half-cracked and extremely foolish individual."

In Rome, after the Italian Government collapsed, Pound continued on the air under the German occupation. But the day after Italy surrendered, partisans seized him at gunpoint. He was imprisoned in Italy for six months, then flown to America.