The Slovik case was also reviewed by the military justice section of the European theater judge advocate and by the branch office of the judge advocate general, which reported:

There can be no doubt that he deliberately sought the safety and comparative comfort of the guardhouse. If the death penalty is ever to be imposed for desertion it should be imposed in this case, not as a punitive measure nor as retribution, but to maintain that discipline upon which alone an army can succeed against the enemy. 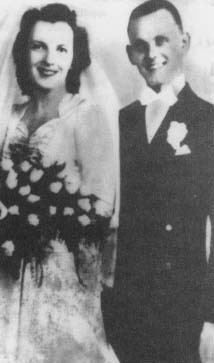 Eddie Slovik and his bride Antoinette on their wedding day.

General Dwight D. Eisenhower, as European theater commander, issued the order confirming the sentence and directing the execution. Eddie Slovik was executed at St. Marie aux Mines in France on January 31, 1945, by a firing squad of 12 enlisted men.

Slovik's widow received no further pay or allowances. His GI insurance was not paid because, she was told, he died under "dishonorable" circumstances. She did not learn until 1953 that her husband had been executed for desertion.