By 1939, the syndicate board knew Buchalter was a liability. He had to go. But sending him off the way Dutch Schultz was sent would inspire Dewey to even greater determination to wipe out the syndicate. From prison, Luciano masterminded a scheme to make Buchalter think a deal had been made. Trusting his pals, he came out of hiding and surrendered to J. Edgar Hoover himself in a car driven by gossip columnist Walter Winchell, then learned he had been double-crossed: There was no deal. Within a month, he was tried in federal court on a narcotics charge, convicted, and sentenced to 14 years. Next, Dewey convicted him on a charge of extortion, with a 30-years-to-life sentence. 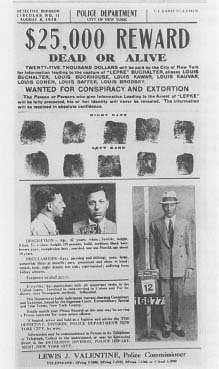 Within a year, one of Buchalter's killers, Abe "Kid Twist" Reles, arrested on a murder charge, decided to talk in exchange for police protection and immunity from prosecution. Soon the syndicate board knew that Reles, who seemed gifted with total recall, had talked for 12 days, filling 25 stenographic notebooks.

With Reles' testimony in May 1940, Brooklyn District Attorney William O'Dwyer (who later served as mayor of New York City, then resigned to become ambassador to Mexico) convicted Frank "The Dasher" Abbandando, Harry "Happy" Malone, and Harry "Pittsburgh Phil" Strauss of the murder of mobster George Rudnick. Sentenced to die, they appealed, citing an error in Judge Franklin Taylor's charge to the jury.

Meantime, O'Dwyer gained a second death sentence for Strauss in September 1940 for killing gangster Irving "Piggy" Feinstein. Convicted with Strauss was Martin "Buggsy" Goldstein. When the New York State Court of Appeals reversed the first convictions, O'Dwyer let Strauss sit in Sing Sing Prison in March 1941 while he convicted Abbandando and Malone all over again. All three then lost appeal after appeal. Strauss and Goldstein were executed on June 12, 1941, and Abbandando and Malone on February 19, 1942.

O'Dwyer pulled Buchalter out of Federal prison in November 1941 and tried him, with Louis Capone and Mendy Weiss, for the murder of candy-store operator Joseph Rosen, whom they had forced out of business and then hit after he threatened to complain to authorities. Reles' testimony, including vivid descriptions of garrotings and ice pick stabbings, brought the first and only conviction and execution of a member of the syndicate board. (Buchalter was one of the wealthiest Americans ever lawfully executed.)

Reles was next scheduled to testify in the trial of Albert Anastasia for the murder of Teamster official Morris Diamond—another outside-the-mob murder that Luciano had cautioned Anastasia against. But early on the morning of November 12, 1941, the body of Kid Twist Reles was found lying 42 feet below the window of the hotel room where six policemen were supposedly protecting him. Deprived of his star witness, O'Dwyer withdrew the charges against Anastasia.

Buchalter, Capone, and Weiss, having exhausted all possible appeals, died at Sing Sing on March 4, 1944. With the earlier executions of Abbandando, Malone, Strauss, and Goldstein, then, a handful of men paid with their lives for the dozens upon dozens of ruthless killings by perhaps 60, perhaps as many as 100, professional killers on the "Murder, Inc." payroll over some 15 years.

Law Library - American Law and Legal InformationNotable Trials and Court Cases - 1941 to 1953Inc. Trials Murder: 1941 - "we Only Kill Each Other", Surrender To J. Edgar Hoover And Walter Winchell, Suggestions For Further Reading