The Diary Written In Purple

Anderson had fired a shot heard "round the world. Headline writers outdid each other shouting that renowned play-wright and director George S. Kaufman had been named in Mary Astor's diary as her lover. Thorpe had the diary, dating from 1929. According to Anderson, its presentation as evidence would prove what everyone in show business knew: that Kaufman's sexual appetite was as great as his well-known appetite for work. And the diary—written, the press reported, in purple ink—would reveal a scorecard by Mary Astor on the performance in bed of almost every well-known actor in show business. 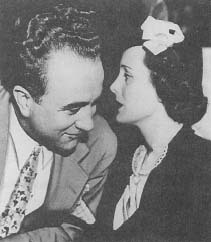 Astor's lawyer, Roland Rich Woolley, told the court he wanted the diary produced by the defense as evidence, to prove that it was not such a compilation of titillation. Astor said the book was a forgery leaked to the press.

Sam Goldwyn, Jack Warner, Irving Thalberg, Louis B. Mayer, and Jesse Lasky and their lawyers tried to convince Astor and Woolley that it would be better for the movie industry and for her not to introduce the diary.