"trial Of The Century"

The opening of the trial in the "Matter of Vanderbilt" October 1, 1934, was jammed with more than 100 reporters, who dubbed it the "trial of the century," and with countless spectators. They heard nurse Keislich testify that she had seen Prince Langenburg and Mrs. Vanderbilt in bed together reading "vile" books. A chauffeur testified about Gloria Morgan Vanderbilt's several lovers. A French maid testified that she had found Lady Milford Haven at Mrs. Vanderbilt's bedside and "kissing her just like a lover." Judge Carew, who later admitted that until then he thought he had heard everything, immediately closed the courtroom to press and public.

The judge, baffled by more than five weeks of shocking public testimony, at last decided to take little Gloria, attorney Burkan, attorney Smyth, and the court stenographer into his chambers. Over 21/? hours, the stenographer recorded such questions and answers as:

How would you like to live with your mother down in the country?

No. Never. I always want to live with my aunt.

You lived a long while with your mother?

Yes, but I have hardly seen her. She has never been nice to me.

Don't you think you could learn to love her?

No. She never even kissed me good night.

On November 21, Gertrude Whitney was awarded custody of little Gloria. But the judge's decision stated that Gloria's mother could have her from Saturday morning to Sunday evening each week, for eight hours on Christmas day, and all the month of July. The New York Journal American summed it up:

Up on a writ, Monday to Friday Mother's unfit.

As the week ends she rises in virtue;

Little Gloria now spent quiet weekdays in Old Westbury, ignored by her Aunt Gertrude, who lost interest in her immediately after the trial, and without nurse Keislich, whom the judge had dismissed. On Saturday mornings, under guard, she traveled to her mother's suite in the Sherry-Netherland Hotel in Manhattan, where reporters mingled with detectives and curiosity-seekers toblock her way and shout questions. 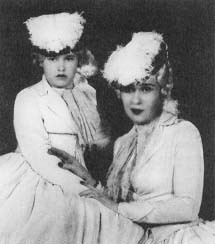 Gloria Morgan Vanderbilt, (right) and Gloria Laura Vanderbilt, (left) in a photograph of them taken after the court's decision to award custody of the child to Mrs. Whitney.

Lawyer Burkan tried to file an appeal to the New York State Court of Appeals. The court declined. Next, he asked the Supreme Court of the United States to review the case, on the grounds that little Gloria's constitutional rights had been violated. It, too, declined.

At 17, Gloria married Pasquale di Cicco, a Hollywood actors' agent. They divorced when, at 21, she came into her nearly $5-million estate. The next day, she married conductor Leopold Stokowski, who was 42 years older than she. The marriage produced two sons and a nervous breakdown for her, and after 10 years they parted, with Vanderbilt winning a custody fight that, ironically, awarded Stokowski permission to see the boys on weekends and for a month in the summer.

In 1956, Vanderbilt married film director Sidney Lumet. After their divorce in 1963, she married writer Wyatt Cooper, who died in 1978. They had two sons. Over the years, she had written poetry before turning to design, creating note cards, linens, china and chic blue jeans. The jeans brought her new wealth—a 3.5-percent royalty on $125 million in sales in 1979 alone—and new fame. In addition, Gloria Laura Morgan Vanderbilt di Cicco Stokowski Lumet Cooper has written two books in a projected five-volume autobiography.

Law Library - American Law and Legal InformationNotable Trials and Court Cases - 1918 to 1940Gloria Vanderbilt Custody Trial: 1934 - "we Are Moving Againâ€”oh What A Life", "trial Of The Century", Suggestions For Further Reading