Liberals and radicals nationwide reacted. The Central Committee of the Communist Party of the United States called the sentences "legal lynching" of "the victims of'capitalist justice.'" Its International Labor Defense (ILD) wing pushed the National Association for the Advancement of Colored People (NAACP) to cooperate on taking the case to the U.S. Supreme Court. In Harlem, 300,000 blacks and whites marched to the slogan "the Scottsboro Boys Shall Not Die."

The ILD hired prominent Chattanooga attorney George W. Chamlee. Requesting a new trial, he and the ILD's chief lawyer, Joseph Brodsky, produced affidavits from Chattanooga blacks stating that they had seen Victoria Price "embracing Negro men in dances in Negro houses," that Ruby Bates had bragged that she could "take five Negroes in one night," that a boarding-house operator had let Victoria use a room for prostitution, that she turned down a white man one night because it was "Negro night." The local press denounced the statements as slander, but a Huntsville detective confirmed that the girls were prostitutes. 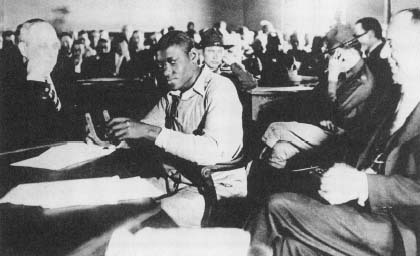